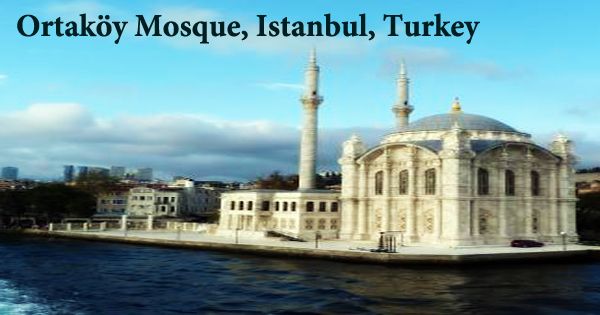 A Visit To A Historical Place/Building (Ortaköy Mosque, Istanbul)

Sultan Abdülmecid I ordered the Ortaköy Mosque (Turkish: Ortaköy Camii), also known as the Büyük Mecidiye Camii (Grand Imperial Mosque of Sultan Abdülmecid), to be constructed between 1853 and 1856. Nikogos, the son of the famous Armenian architect family Balyan, designed it. The modern Bosphorus Bridge (also known as the Bridge of the July 15 Martyrs) looms behind the restored mosque, offering a great photo opportunity for those looking to catch Istanbul’s ‘old meets new’ character. The mosque in Beşiktaş, Istanbul, Turkey, is located on the water’s edge of the Ortaköy pier square, one of the Bosphorus’ most popular destinations. This structure is symbolic of Ortaköy since it has a unique view of Istanbul’s Bosphorus Strait and the Bosphorus Bridge. The mosque can be seen from the famous Bosphorus Cruise, which takes tourists from Istanbul’s Asian to European sides on a ferry boat. Ortaköy, once known as “the village in the middle” (orta) of the European Bosphorus coast, is now one of Istanbul’s coolest, chicest, and artsiest neighborhoods, with trendy boutiques, atmospheric cafés and bistrots and crowds of young, sophisticated residents and tourists. There used to be a small masjid on the site of the present-day Ortaköy Mosque. It was built in 1720 and was destroyed in 1731 during the Patrona Halil Uprising. The new mosque, which was built on the ruins of the Cantemir Palace, was ordered by Ottoman Sultan Abdülmecid and built between 1854 and 1856. Several masterful examples of Arabic calligraphy executed by Abdül Mecit, an accomplished calligrapher, hang beneath the mosque’s ornate ceiling. The mosque faces skele Meydan, the former fishing village’s main thoroughfare with a lovely fountain and waterfront cafes. On weekends, an unremarkable but famous street market takes place in the square and surrounding streets.

This mosque exemplifies Ottoman Baroque architecture. The mosque is the landmark of the former fishing village, with a central domed structure flanked by four corner towers with baroque domes and two elegant minarets rising into the sky. The light-filled interior is reminiscent of a baroque castle, with its marble-paneled prayer hall and low-hanging crystal chandeliers. The wide windows capture the special light effects created by sunlight reflected in the water. There are also beautiful calligraphies by Abdülmecid, a true master of Arabic prose, on show. It was designed in the Neo-Baroque style by Armenian father and son Garabet Amira Balyan and Nigoayos Balyan (who also designed the nearby Dolmabahçe Palace and the Dolmabahçe Mosque). The mosque’s single dome was originally made of bricks. The dome, however, formed cracks over time and was on the verge of collapsing, so a new dome was built out of concrete. Walk east on Osmanzade to reach the Bosphorus shore and Ortaköy’s most prominent landmark: the Büyük Mecidiye Camii (Grand Imperial Mosque of Sultan Abdülmecid I), also known as the Ortaköy Camii (Ortaköy Mosque), a late example of Istanbul’s imperial mosques, which is almost in the water on the BosphorusEuropean shore. The mosque was destroyed by an earthquake in 1894, and it was also damaged by a small fire in 1984. As a result, the building has undergone several repairs and restorations over the years. It consists of a two-story “sultan apartment” with a “U-shaped” layout, as well as the main venue with a square layout and one dome. Carvings and relief “enriched” the mosque’s “sliced facades” with mounting columns, giving it a “dynamic appearance.” Two rows of windows provide “healthy lighting” to the main location. The view of the prayer house from the Bosphorus Bridge is a classic that everyone can appreciate from afar while on a Bosphorus cruise. The Ortaköy Mosque’s renovation work was finished in June 2014, and it was reopened to worshippers and the general public. Several masterful examples of Turkish calligraphy adorn the Mosque’s interior walls. Sultan Abdulmecid, who was also an accomplished calligrapher, developed these handicrafts. Ortakoy Square is a popular spot for locals to meet and stroll. With its lovely boutiques, waterfront cafés, and restaurants, it creates a welcoming atmosphere. Coffeehouses and tea terraces with views of the water now line the seafront next to the mosque, as they have for decades, if not centuries, and are one of Ortaköy’s most popular attractions.