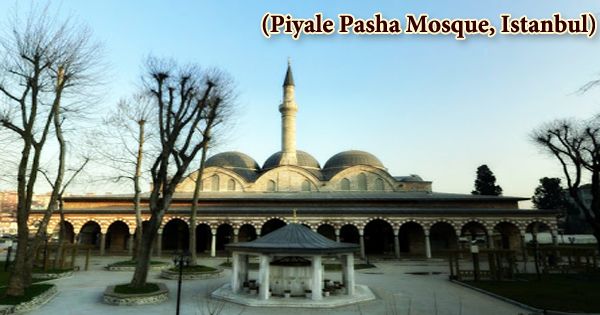 A Visit To A Historical Place/Building (Piyale Pasha Mosque, Istanbul)

The Piyale Pasha Mosque (Ottoman Turkish: پیاله پاشا جامع‎ Piyale Paşa Camii), also known as the Tersane Mosque (literally: Shipyard Mosque), was built during the reign of Selim II by the then-grand admiral, Mehmet Piyale Pasa (1553-1577). (1566-1574). It is a 16th-century Ottoman mosque in Istanbul, Turkey, situated in the Kasmpaşa neighborhood of the Beyoğlu district. A dervish lodge, a madrasa, a bathhouse, and a tomb were all constructed as part of a larger complex that included the mosque. Much of the structures were demolished over time, but the mosque and tomb remained. The complex was built on the site of a former dockyard, which was also the location of a proposed canal project backed by Piyale Pasa. The canal scheme, which was abandoned after his death, was intended to improve civic life in the city. The Piyale Pasha Mosque was built for the vizier and grand admiral Piyale Mehmed Pasha by Ottoman imperial architect Mimar Sinan. Between 1565 and 1573, the mosque was built. The Piyale Pasa Mosque is a six-domed structure with identical domes arranged in two rows of three, unlike Sinan’s other mosques, which build their spatial and structural composition around a single central dome. The prayer hall is approximately 35 meters long by 20 meters wide, with additional bays on both ends of the domed bays. Two tapered granite piers in the center of the prayer hall support the six domes, each measuring approximately nine meters in diameter. They are put on the qibla and along the entrance walls. The transformation from the round dome to the rectilinear walls is made possible by pendentives. The positioning of these piers in the central space may have resulted in a lack of spatial integrity, but the piers’ slenderness counteracts this. The slim walls, which are buttressed along the qibla, have the same slenderness. The lateral thrust of the domes is assisted by the tapering buttresses along the qibla wall. However, opposite the mihrab, in the center of the entrance wall, where the minaret stands, the wall thickness rises significantly. The Piyale Pasha Mosque is made up of six identical domes arranged in two rows of three, each measuring about 9 meters in diameter (30 ft). It is one of only two mosques with multiple domes in Istanbul, the other being the Vasat Atik Ali Pasha Mosque.

The anti-qibla wall’s minaret is located in the middle. In the mid-nineteenth century, it was restored. A series of Iznik tiles with inscriptions in white thuluth script on a cobalt-blue backdrop wraps around three interior walls. The mosque’s two entrances are located on either side of the minaret, and each entrance has two windows on either side. Given the mosque’s three-bay configuration, which embodies a solid middle axis and two similar wings, this symmetrical approach fits well on both the exterior and interior. The muezzin’s platform, which is situated just behind the minaret wall, is positioned better than in most single-domed structures. Six slender columns support the platform, which is supported by pointed arches. The order in which the muezzin’s platform and the minaret are built emphasizes the importance of the qibla axis. The peculiar position of the minaret and unresolved proportional problems, on the other hand, detract from the exterior phrase. The tomb of Piyale Pasha, as well as those of his sons and daughters, is housed in the domed octagonal mausoleum to the northwest of the mosque. There are thirteen sarcophagi in all. His wife, Gevherhan Sultan (Selim II’s daughter), remarried and is buried next to Hagia Sophia in Selim II’s mausoleum. The entrance wall’s northeastern and northwest corners are articulated with rectangular stair shafts that lead to the side platforms and upper porticos. The double-story porticos of the Piyale Pasa Mosque are another notable feature, consisting of cross vaults supported by rectangular columns at the base and galleries above. The gallery roof was supported by ninety marble columns; today, the majority of these columns, as well as the roof, have vanished. Several identical Iznik tiled lunette panels are thought to have been taken from the Piyale Pasha Mosque in the 19th century and are now on display at the Musée du Louvre in Paris, the Museu Calouste Gulbenkian in Lisbon, and the Victoria and Albert Museum in London. The mosque’s fenestration pattern, which consists of four rows of various aperture sizes, differs from Sinan’s other works. The mosque’s walls are made of cut and rough stone, while the domes and vaults are made of brick; The minbar is a marble. Cerkez Hasan Çelebi’s remarkable blue Iznik tiles with white inscriptions encircle the prayer hall between the second and third rows of windows. The restoration of the minaret is dated to the end of the 18th century, according to an inscription under the copper-covered crown of the minaret. Christie’s auctioned two tiles from another lunette panel and a pair of tiles that were most likely from the mihrab in 2004. The mosques’ unique design approach leads to two possibilities: it could be one of Sinan’s more experimental designs, or it could have been planned by another architect, perhaps under Sinan’s supervision. Since the mosque isn’t mentioned in Sinan’s memoirs, the evidence points to the latter.