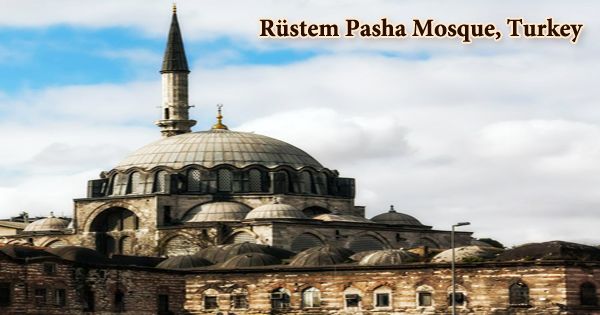 A Visit To A Historical Place/Building (Rüstem Pasha Mosque, Turkey)

The Rüstem Pasha Mosque (Turkish: Rüstem Paşa Camii) was built for Rüstem Paşa, Grand Vizier to Süleyman the Magnificent, by the renowned Ottoman architect Mimar Sinan. It is an Ottoman mosque in the Tahtakale neighborhood of Istanbul’s Fatih district, in the Hasırcılar Çarşısı (Strawmat Weavers Market). The mosque houses some of the most exquisite and delicate classical Iznik tiles from the 16th century. The mosque was completed in 1563, two years after the Pasha’s death, and is considered one of Sinan’s many masterpieces, as well as a fitting homage to its highly controversial namesake. It isn’t the most ornate mosque, and it makes no effort to outshine the much larger Süleymaniye Mosque, which stands atop the hill above. Instead, it’s tucked away in a busy business area near Eminonu’s Spice Market. Instead, the mosque’s wealthy patron, Rüstem Pasha, a son-in-law of Sultan Süleyman the Magnificent (1520-1566), concentrated on the finer points, especially the interior decorations. Rustem Pasha was a talented Grand Vizier and a master of finance who significantly increased the empire’s trade. Rustem Pasha’s financial supervision was a boon, but he also carried a frothing temper and a well-documented appetite for riches and influence with him. He was so divisive that he was forced to resign as Grand Vizier, only to return three years later when his successor was executed as a result of his own meddling. His mosque in Tahtakale, the imperial capital’s significant commercial port, is a fitting homage to a complex yet undeniably successful statesman.

The Rüstem Pasha Mosque is open daily from 10 a.m. to 6 p.m., but visitors are not permitted during prayer hours. The mosque was built on a high terrace atop a complex of vaulted shops whose rents were intended to help fund the mosque’s construction. A spacious courtyard is reached through narrow, twisting interior flights of steps in the corners. A deep and low roof backed by a row of columns projects from the mosque’s double porch with five domed bays. Within, the colorful tiles are a particular highlight. They were made during Iznik’s golden age of tiling. Since red was difficult to glaze onto a tile at the time, it was used in this way. The Rustem Pasha Mosque’s tiling is almost unanimously regarded as an architectural masterpiece with a breathtakingly beautiful interior. Those tiles came from Iznik, which prospered economically thanks in part to the pasha’s ability to promote domestic development through a protectionist foreign trade policy. Rustem Pasha’s legacy is perfectly encapsulated by the strong presence of those tiles, the ideal position in Tahtakale, and the sign of the mosque as a tribute to his career. Some of the tiles, especially those in a wide panel beneath the portico to the left main entrance, are painted in the earlier ‘Damascus ware’ color scheme of sage green and dark manganese purple. No other mosque makes such extensive use of Iznik tiles; Sinan used files more sparingly in later mosques. The use of shops in a busy commercial area in the mosque complex accomplished just what the pasha had hoped for, and cemented it as the greatest tribute to his many charitable contributions. The building’s plan is essentially an octagon inscribed in a rectangle. The main dome is supported by four semi-domes that run diagonally around the building rather than along its axes. The dome’s arches are supported by four octagonal pillars, two on the north and two on the south, as well as piers jutting out from the east and west walls. Galleries to the north and south are separated by small marble columns and protected by pillars. The Rustem Pasha is regarded as an architectural marvel, but it is also a fitting homage to one of Ottoman history’s most dynamic Grand Viziers.