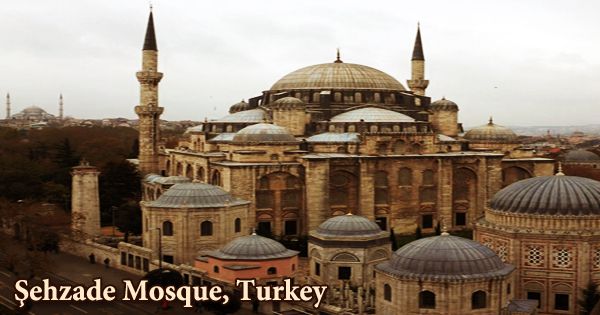 A Visit To A Historical Place/Building (Şehzade Mosque, Turkey)

The Şehzade Mosque (Turkish: Şehzade Camii, from the original Persian شاهزاده Šāhzādeh, meaning “prince”), also known as the Princes’ Mosque, is a 16th-century Ottoman imperial mosque in Istanbul, Turkey’s Fatih district on the third hill. Mimar Sinan, a well-known architect, designed it between 1543 and 1548. Sultan Suleiman the Magnificent dedicated it to his favorite son, Crown Prince Mehmed, who died at a young age. Mehmed was the eldest son of Süleyman’s only legal wife, and he was poised to embrace the sultanate after Süleyman’s untimely death. Süleyman is said to have mourned Mehmed’s death for forty days at his temporary tomb in Istanbul, where renowned imperial architect Sinan would quickly create a luxurious mausoleum for the princely heir as part of a larger complex dedicated to him. Sinan’s first imperial commission, and eventually one of his most ambitious architectural creations, was the complex. A congregational mosque, madrasa, rest house (tabhane), caravanserai, hospice, elementary school, cemetery, and six mausolea are all part of this complex. In English, it is often referred to as the “Prince’s Mosque.” The mosque’s windows were shattered in a June 2016 attack. A half-dome on either side supports the 37-meter-high main dome, which has an 18-meter diameter. Sinan built four half-domes instead of two for the first time, with more domes added to each half-dome. This resulted in a square floor plan that narrowed as it progressed from floor to floor. This architectural scheme is reminiscent of Sinan’s pupil’s later Blue Mosque.

An inscription on Mehmed’s mausoleum, the oldest in the complex, dates it to 1543-1544/950 AH. The mosque was built between 1544 and 1548/951 and 955, according to inscriptions on the walls. By 1549/956 AH, the complex was nearly complete. The mosque is approached from a marble-paved colonnaded forecourt that is the same size as the mosque. A portico with five domed bays on either side and arches in contrasting pink and white marble surrounds the courtyard. The ablution fountain (şadrvan) in the middle was a later gift from Sultan Murat IV. The twin minarets have two galleries with intricate geometric sculpture in low bas-relief and terracotta inlays on occasion. It is Sinan’s only non-sultanic mosque, with a pair of minarets and two galleries. The complex’s buildings are arranged in and around an irregularly shaped central walled enclosure that surrounds the mosque and mausoleum. The mosque is in the middle of the walled enclosure, surrounded on all sides by gardens and paths leading to other structures. The mosque is square in shape, with a central dome and four half-domes flanking it. The dome has a diameter of 19 meters (62 feet) and a height of 37 meters, and is protected by four piers (121 ft). The six mausolea are clustered along the complex’s southern wall, near its eastern end, behind the mosque’s qibla wall. Outside the northern wall of the central enclosure, the madrasa, caravanserai, and rest house are aligned, with the madrasa at the western end and the rest house and caravanserai at the eastern end. The decorated exterior, with its rhythmically arranged dome framework and two beautiful minarets, has a clear, strong, and light atmosphere, while the interior has a flat, solid, and light atmosphere. The mosque is made up of two 42-meter-square blocks: a domed prayer hall and an enclosed courtyard. The mosque has five main entrances, three of which lead to the front courtyard and two to the prayer hall, and are accessible from the north, south, and west. The eastern elevation of the mosque is formed by the qibla wall. A wall surrounds the mosque and its courtyard, separating it from the rest of the building. The central dome reaches a maximum height of 37 meters, indicating a spherical space when viewed in part. Wide buttresses that provide additional structural support for the heavy central dome are concealed behind three-meter-deep galleries on the north and south walls. The mosque’s interior is decorated in a simple yet elegant manner. Whitestone dominates the interior, with polychrome Iznik tile work in radial geometric designs at the centers of each dome and semi-dome of the ceiling, as well as inside triangular panels on the squinches and pendentives. Aside from the mosque, the complex includes Prince Mehmed’s mausoleum, two madrasahs, a public kitchen, and a travelers’ inn (caravansarai). Hümaşah, the prince’s only daughter, and Cihangir, the prince’s youngest child, are also buried here. The madrasa is situated 37 meters north of the mosque, along the northern wall of the enclosure, in the northwest corner of the complex. Twenty small cells and the second row of vaulted galleries are arranged around a wide rectangular central courtyard, as is typical of Ottoman architecture.