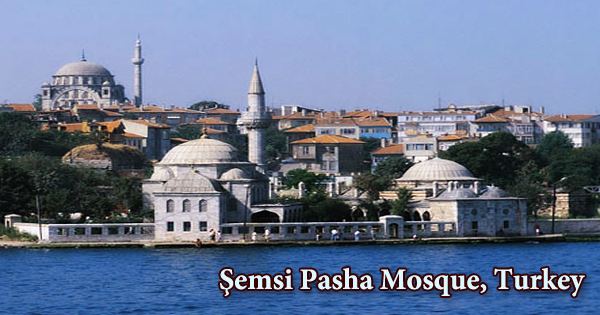 A Visit To A Historical Place/Building (Şemsi Pasha Mosque, Turkey)

The Şemsi Pasha Mosque (Turkish: Şemsi Paşa Camii, also spelled Chamsi-Pasha) was designed in 1580 for Grand Vizier Şemsi Ahmet Pasha, according to a design by Mimar Sinan. It is the architect’s smallest building to date, and it is very modest in scale and decor. It is an Ottoman mosque in Istanbul’s Üsküdar district, which is wide and densely populated. Despite its small size in comparison to other Sinan creations, it is one of the city’s most attractive structures, with its scenic waterfront setting making it a popular tourist destination. The Vizier’s türbe and a former medrese, which now acts as a public library, are both located within the complex. The mosque’s small rooms are decorated with beautiful stained-glass windows and suras from the Qur’an. The garden has a spectacular view of the Bosphorus and the European side of the river. Semsi Ahmed Pasa (d.1580), an officer in Ottoman Sultan Süleyman I’s (1520-1566) court who later served as governor of Anatolia and Rumelia, commissioned the complex on the coast of Üsküdar. It was designed by court architect Sinan near the Semsi Pasha’s palace and completed in 1580, according to an inscription on the mosque portal. The General Directorate of Religious Endowments undertook a major renovation project in 1940, which was overseen by architect Süreyya Yücel. The Mosque is one of the smallest in Constantinople to be built by a Grand Vizier, but its small size, coupled with its picturesque waterfront location, has made it one of the city’s most attractive mosques. The Mosque is a well-known example of the chief architect’s ability to combine architecture and the natural landscape organically. The complex is situated on an approximately rectangular plot of land that runs east-west parallel to the Bosporus shoreline. The square, single-domed mosque is angled towards the shore, with the donor’s tomb extending towards the water’s edge. An L-shaped madrasa to the west and south, and a seawall with grill-windows to the north, surround the precinct. The eastern precinct, behind the mosque’s qibla wall, is occupied by a walled cemetery.  The tomb of Şemsi Pasha, the Grand Vizier for whom the mosque was built, is on the grounds, in a private cemetery adjacent to a lovely garden. Furthermore, an L-shaped madrasa, where people come to study and learn, and a seawall with grill-windows to the north, giving the impression of being in a picture gallery looking at framed Bosphorus seascapes, surround the precinct.

The complex is situated on an approximately rectangular plot of land that runs east-west parallel to the Bosphorus shoreline. The square, single-domed mosque is angled against the shore, with the donor’s mausoleum extending towards the water. The madrasa surrounds the garden on two sides, the mosque on the third, and the sea wall on the fourth, which overlooks the Bosphorus. The precinct courtyard, which is shared by the mosque and the madrasa, is entered via a gate along the seawall. A narrow passage leads to this courtyard from a secondary gate along the cemetery wall to the east. The madrasa arcade is faced across the courtyard with the mosque portico, which envelops the prayer hall to the northwest and southwest. The portico and arcade are both protected by shed roofs and have pointed arches supported by diamond-cut capitals on columns. During the 1940 reconstruction, the mosque portico was restored. The southwest corner of the prayer hall is bordered by a single minaret with a single balcony. The Mosque is surrounded by a larger complex on the Üsküdar coast, which was also designed by court architect Sinan and constructed near the Şemsi Pasha Palace in 1580, according to an inscription on the mosque portal. The “Kuşkonmaz Camii” is another name for the Şemsi Pasha Mosque. Surprisingly, there are no birds that land here. It is thought that movements caused by the wind or waves inside the mosque complex annoy birds, causing them to avoid approaching the mosque walls. The prayer hall is entered through a marble portal on the northwest wall and is topped by a single dome that measures about eight meters in diameter. Four squinches over an octagonal drum pierced with four arched windows form the transition to the dome. There are nine casement windows in the prayer hall, two on each wall and one on the southeast wall. A circular window is mounted above the mihrab, and each casement is topped by an arched window with different colored glass composition. A muqarnas hood adorns the simple marble mihrab. Muqarnas carvings were also used to emphasize the squinch arches’ springing. The wooden minbar is a more modern alternative. The prayer hall is connected to the mausoleum. It is approached from the northwest, but a grilled archway leads into the prayer hall. At the height of the prayer hall drum, a mirror vault crowns the chamber. It has three casement windows facing the Bosphorus, as well as nine upper windows with colored glass on three walls. The prayer hall is connected to the tomb chamber, which measures about four meters by four and a half meters. It is approached from the northwest, but a grilled archway leads into the prayer hall. At the height of the prayer hall drum, a mirror vault crowns the chamber. The L-shaped madrasa has twelve domed cells and a wide classroom, all of which are fronted by an arcade with nineteen columns supporting a shed roof. Except at the northern end, where a single cell encloses the arcade before the seawall, the cells are all in a row. The seven-meter-square classroom is located in the western wing of the madrasa and extends beyond the madrasa wall. Three of the classroom’s walls have six windows, leaving the western wall open for a furnace and two shelving niches. Two windows, a furnace, and one or two shelving niches are found in each madrasa cell. Following the renovation, the arcade was expanded, and the madrasa was refurnished to house a library in 1953, with the classroom serving as the reading area. At the end of the southern wing, there is an additional space with privy cells.