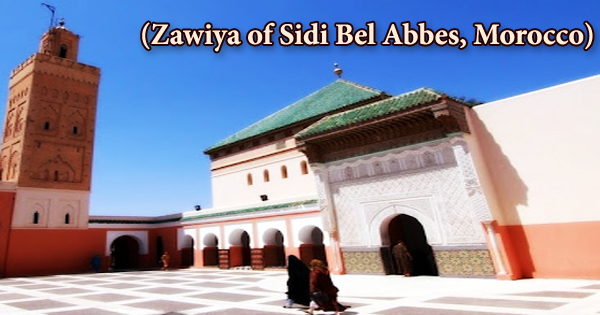 A visit to a historical place/building (Zawiya of Sidi Bel Abbes, Morocco)

In 1605, Sa’dian ruler Abu Faris al-Wathiq (reg. 1603-1609) commissioned the Zawiya of Sidi Bel Abbes or Zaouia of Sidi Bel-Abbès (Arabic: زاوية سيدي بلعباس) in Marrakech to honor a prominent twelfth-century Sufi preacher. In Marrakesh, Morocco, it is an Islamic religious compound (zawiya). The tomb of Abu al-Abbas as-Sabti (or Sidi Bel Abbes), a Sufi instructor who died in 1204, is the focal point of the complex. He is the most revered of Marrakesh’s Seven Saints, and is often regarded as the city’s “patron saint.” Visiting Sidi Bul Abbas’ tomb is a small pilgrimage approved by the Islamic religion. A tomb, a mosque, and numerous religious and educational institutions are organized around two connected courtyards in the Sidi Bul Abbas complex. A blind refuge is another interesting initiative inside the complex, as Sidi Bul Abbas was well-known for his humanitarian activities on their behalf. The architecture of the zawiya may be traced back to the late Saadian period (early 17th century), although it has been altered and renovated numerous times since then. The complex’s layout is very uneven, with a variety of building sizes surrounding two roughly rectangular courtyards that meet at an overlapping corner. Each building in the complex has a structural grid that is aligned to one of two primary longitudinal axes. From the north-south meridian, the first of these axes is rotated eighteen degrees counter-clockwise. A series of scaled grids generated from this axis, which control the southwestern section of the complex, are oriented to the mosque, madrasa, blind hospital, marketplace, and washrooms. The zawiya was initially outside the city walls, at the ancient northern gate of Bab Taghzout, but his zawiya drew more and more people to the region until it became a bustling neighborhood outside the city walls. Abu al-Abbas was selected as one of Marrakesh’s “Seven Saints” in the late 17th century, and his tomb became one of the sites on a related ziyara (pilgrimage) founded on the initiative of the Alaouite ruler Moulay Isma’il (ruled 1672–1727). The tomb of Sidi Bul Abbas, the cemetery, ceremonial slaughterhouses, and accommodations are all located in the complex’s northeastern section. The north-south axis of this portion of the complex is turned twelve degrees counter-clockwise from the north-south meridian. Two large courtyards occupy the interstitial area between the opposing development clusters, buffering the six-degree planar orientation rotation.

At its widest points, the cluster of buildings measures 130 meters north to south and 90 meters east to west. In the nineteenth century, the complex was extended once again. A long linear souk specializing in passementerie was constructed along the roadway leading to the zawiya’s southern gate in 1850 (during the reign of Abd er-Rahman), and an ornate fountain was added in the courtyard facing the mausoleum’s entrance in 1870 (during the reign of Muhammad IV). On the orders of King Hassan II, the complex was restored once more in 1988. A linear bazaar runs from the adjacent souks into a tiny triangular entry plaza, where the complex is accessed. This bazaar is roughly 36 meters long and 12 meters broad, with a four-meter grid layout. Covered booths surround an unroofed center aisle, dividing the bazaar’s breadth into three bays. Visitors are funneled into a tight three-meter-wide, twenty-eight-meter-long lane at the end of this market, which leads to the first of the complex’s two major courtyards. A succession of tiny rooms, measuring on average four meters on each side, encircle this twenty-six-meter-wide and twenty-meter-long courtyard. The courtyard’s western boundary is formed by the massive mosque’s eastern wall. At the middle of the southern wall of the courtyard is a fountain for visitors to the mosque and tomb. The entrance of Sidi Bul Abbas’ tomb is in the middle of the northern wall defining the courtyard. The courtyard’s northeast corner is occupied by an abattoir (part of the complex’s food-supply services), its northern border by residential buildings, and its western side by a complex of structures that includes a set of latrines and a blind asylum. A rectangular structure, the madrasa, lies to the southwest of the second major courtyard and west of the mosque building, and further west of this, on the opposite side of another north-west roadway, is a hammam (bathhouse). The mosque is presently the sole structure in the complex that substantially dates from Abu Faris’ Saadian construction (early 17th century). Although it is smaller than the Mouassine Mosque erected by the Saadians earlier in the previous century, its layout and ornamentation are almost comparable. The mosque’s interior is hypostyle, with a courtyard (sahn) comprising most of its northern side. From north to south, the structure is 38 meters in length and 30 meters in width. Its main entrance, which is positioned on the complex’s central axis, is located on the southern side of the complex’s wide northwest courtyard. The tomb is a rectangular room with a pyramidal ceiling that measures fifteen meters on each side. It opens into a nine-meter-wide, fourteen-meter-long courtyard with a fountain at its center through a gallery on its eastern side. Pilgrims utilize this tiny area, which is only accessible via the tomb, for peaceful contemplation and prayer. To the north of the mausoleum is a cemetery with a width of fifteen meters and a length of eleven meters. The prayer hall, which takes up the rest of the structure, is divided into seven naves/aisles by rows of horseshoe arches that run perpendicular to the southern wall. The southern wall also serves as the qibla, or prayer direction; the mosque and its surrounding structures are actually angled 18 degrees east (or counter-clockwise) from the north-south meridian to suit the estimated prayer direction. The mosque’s central nave is slightly broader than the others, and the arches right in front of the southern qibla wall are replaced by another aisle that runs parallel to that wall, producing the “T”-plan seen in other medieval mosques in the region. The mosque’s mihrab is located in the middle of the southern wall, aligned with the central nave (a wall niche symbolizing the direction of prayer). The qibla niche is placed in the middle of the mosque’s southern wall. The mosque’s minaret stands in the northeast corner, marking the junction of the two main courtyards. The courtyards are laid out in a rectangular grid design with big black and white stone tiles. The buildings’ roofs are built of various hues of tile; the pyramidal roof of Sidi Bul Abbas’ mausoleum is covered with the region’s characteristic green glazed ceramic tile. The mausoleum’s interior contains zellige mosaics on the walls, stained-glass windows, and a magnificent painted wooden dome roof. A square chamber, behind the mihrab on the mosque’s south side, operated as a library, comparable to the Saadian library chamber built earlier to Fez’s Qarawiyyin Mosque. The structures of the Sidi Bul Abbas Complex have been properly preserved over the ages since they have remained a highly prominent devotional destination in Marrakech. Since its initial sponsor, Abu Faris al-Wathiq, the complex has been a focus of architectural investment for virtually every Moroccan ruler.