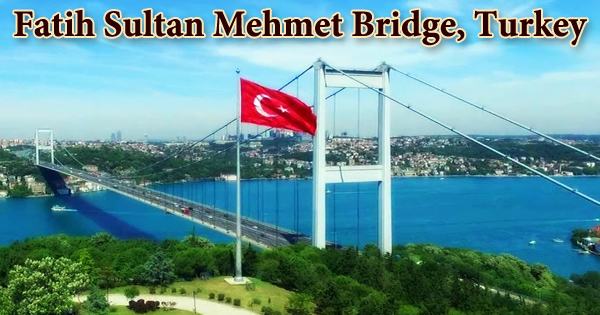 The Fatih Sultan Mehmet Bridge, also known as the Second Bosphorus Bridge (in Turkish: Fatih Sultan Mehmet Köprüsü, F.S.M. Köprüsü or 2. Köprü), is still an important tool in the Turkish capital’s economic modernization, as well as for the entire region (built by Salini Impregilo, WeBuild, between 1985 and 1988). It is a suspension bridge in Istanbul, Turkey, that spans the Bosphorus strait (Turkish: Boaziçi), which separates Asia and Europe. When it was completed in 1988, it was the world’s fifth-longest suspension bridge span; it is now the world’s 24th. For its historical context, this infrastructure project was exceptional. The bridge is 1510 meters long, with a 1,090-meter main span. The bridge is named after Mehmed the Conqueror, a 15th-century Ottoman Sultan who captured the Byzantine capital of Constantinople (Istanbul) in 1453. The European route E80, Asian Highway 1, Asian Highway 5, and Otoyol 2 highways all pass through it. The Yavuz Sultan Selim Bridge and the 15 July Martyrs Bridge are two other bridges in Istanbul that link Europe and Asia (formerly known as Bosphorus Bridge). The bridge spans the Bosphorus at its narrowest point (660 meters). The bridge connects Istanbul Hisarüstü (European side) and Kavack (Asian side). It’s a steel-pyloned suspension bridge with vertical hangers that’s gravity-anchored. Double vertical steel cables support the aerodynamic deck. It measures 1,510 meters in length and has a deck width of 39 meters. The main span gap between the towers is 1,090 meters, and their height above road level is 105 meters. The bridge has a clearance of 64 meters above sea level. According to Freeman Fox & Partners’ plans, the major project was completed by a group of three Japanese, one Italian, and one Turkish company. Eight lanes and two emergency lanes make up the nearly 40-meter-long route. It has the same dimensions as the First Bosphorus Bridge, with a length of 1,510 meters and a clearance of 64 meters above sea level.

Istanbul was experiencing a major transition in the 1980s, and the capacity of the city’s first bridge, constructed in 1973, was no longer adequate to meet the city’s transportation needs. As a result, a decision was made to build a second bridge across the Bosphorus, one that, due to its size and ability, could help to speed up trade between the two sides of the Strait. With a span of 1,090 meters (3,576 feet) and towers 107 meters (351 feet) high when it opened, it was the world’s fifth-longest suspension bridge. It took 600,000 meters (1.96 million feet) of rock excavation and 140,000 cubic meters (4.9 million cubic feet) of concrete to complete the project. On July 3, 1988, Prime Minister Turgut Özal drove his official car over the bridge for the first time, becoming the first to do so. The bridge was built at a cost of US$130 million. The bridge connects Edirne and Ankara on the Trans-European Motorway. In each direction, the highway bridge has four lanes for vehicular traffic and one emergency lane. The steel span is 3 meters (9.8 feet) thick and 39.4 meters (129 feet) high, and it is designed to be flexible in the event of a seismic event. Every day, approximately 200,000 vehicles cross the Bosphorus via the second bridge. This figure is comparable to the number of large bridges in New York City, demonstrating the strategic importance of this infrastructure for Istanbul’s economic growth. While the Fatih Sultan Mehmet Bridge is a toll bridge, payment is only needed from vehicles traveling to Asia; unlike the First Bosphorus Bridge, payment is not required when traveling from Asia to Europe. The bridge has provided toll receipts of $1.8 billion (2020) since its opening in 1988, according to data from Turkey’s Highways Directorate, and 847 million vehicles have crossed it. On the European side, the bridge connects the Hisarüstü District with the Kavack District on the Asian side. The bridge has remained a critical piece of Turkish infrastructure, and repair work has continued to ensure that its usefulness has never been jeopardized.