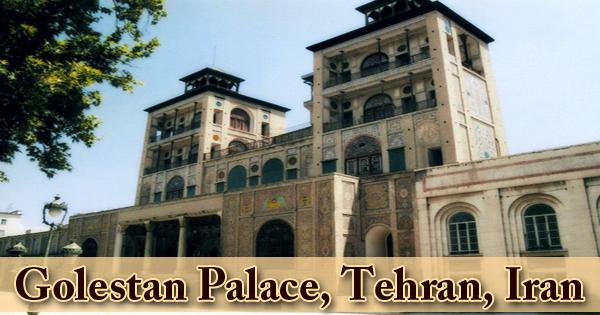 A fine example of Persian art, culture, and architecture, the Golestan Palace (Persian: کاخ گلستان‎, Kākh-e Golestān) is the former royal Qajar complex in the capital city of Iran, Tehran. It is the precious gem sitting in the heart of Tehran bearing Pahlavi kings’ memories from the Safavid period. It is the capital’s highlight and attracts many tourists from Iran and abroad on a regular basis. The Golestan Palace, one of the oldest historical monuments in the city of Tehran and a World Heritage Site, belongs to a group of royal buildings once enclosed within the mud-hatched walls of Tehran’s arg (“citadel”). It consists of gardens, royal houses, and 18th and 19th century collections of Iranian crafts and European presents.

The palace sits in an area that was the northern border and gateway of the city during the Qajar period, originally named Tehran Arg, which is a good measure to find out how far the city has grown since then. During the Safavid period, the palace was built and added to this structure by the next dynasties. Today, 17 palaces, museums, and halls make up the complex. Although there was a Safavid-era citadel on this site, it was Nasser al-Din Shah (r 1848–96), impressed by what he’d seen of European palaces, who created the ‘Palace of Flowers’ visitors see today. Originally, it was much larger, with internal and external parts containing departments, ministries, and private living quarters, but under the Pahlavis, many nearby buildings were pulled down.

The Golestan Palace was used for formal royal receptions during the Pahlavi period (1925–1979), and the Pahlavi dynasty built their own palace (the Niavaran Complex) in Niavaran. During Naser al-Din Shah Qajar kingdom, the main modifications were made. He was the first Iranian king who traveled a lot to the western countries and was fascinated by their architecture because his kingdom was long (49 years) and so he tried to construct similar structures in Tehran. In between 1925 and 1945, a large portion of the buildings of the complex was destroyed on the orders of Reza Shah. The centuries-old Qajar palace, he claimed, should not impede the growth of a modern city. Commercial buildings in the new style of the 1950s and 1960s were erected in place of the old buildings.

Some important moments in Iran’s history have been witnessed by the Golestan Palace, such as the Constitutional Transition, the coronation of the first and second Pahlavi dynasties. Golestan Palace’s complex consists of 17 buildings, including palaces, libraries, and halls. During the 131-year rule of the Qajar kings, almost all of this complex was established. On several occasions, such as coronations and other major celebrations, these palaces have been used. It is also made up of three primary libraries, including the photographic archive, the manuscript collection, and the record archive.

Golestan Palace’s complex consists of 17 buildings, including palaces, libraries, and halls; some are: 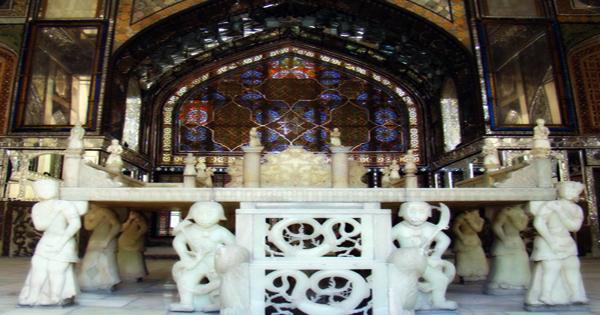 This spectacular terrace, known as the Marble Throne, was designed by the order of the Qajar dynasty’s Fath Ali Shah (r. 1797–1834) in 1806. Iranian elements such as tile work, mirrors, stucco, lattice windows, and paintings decorate the terrace. The fine marble throne on the terrace is built out of Yazd Province’s famous yellow marble. The throne is made of sixty-five pieces of marble and was designed by Mirza Baba Naqash Bashi (“head painter”) of the Qajar court. Mohammad Ebrahim, the Royal Mason, oversaw the construction and several celebrated masters of the time worked on the execution of this masterpiece. During the reigns of Fath Ali Shah and Nasser ed-Din Shah (r. 1848-1896), the architectural details, and other terrace ornaments, were completed. This hall was used on ceremonial occasions, including Reza Shah’s 1925 Napoleon-style self-coronation. 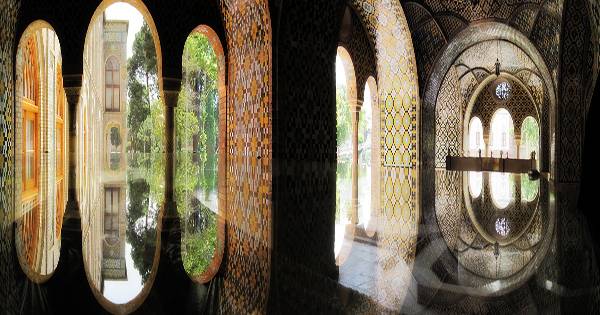 There is another terrace on the right corner of the Marble Throne, called Khalvat-e Karim Khani (Karim Khan Nook). Dating back to 1759, this building was part of the Zand dynasty’s interior residence of Karim Khan.  The Karim Khani Nook’s basic structure is identical to the Marble Throne. On this terrace, there used to be a marble fountain and Naser al-Din Shah lay there smoking his Qalayan and enjoying the lovely, lush garden. The fountain has been removed and the Naser al-Din Shah marble tombstone has been brought here. Artwork by the great and well-known Iranian artist of the Qajar period, Kamalol Molk, depicts a terrace with a fountain. Water drained from the fountain into the pond from a subterranean stream (the king’s qanat) and was later used to irrigate the palace grounds.

Visitors will see the chinaware that Qajar Kings got as a gift from European kings and queens such as Napoleon Bonaparte, Nicholas I of Russia, Queen Victoria, and so on in the container hall (Talar-e Zorouf) This building replaced the Narenjestan building to the north of the Ivory Hall (Talar e Adj).

Ivory Hall is a spacious hall that is used as a dining space. It was decorated with some gifts given by European monarchs to Nasser ed-Din Shah. A watercolor by Mahmoud Khan Saba (Malek osh Shoara) shows the exterior view of this hall during the Qajar era, among the collections of the Golestan Palace.

Next is the Negar Khaneh (Gallery of Iranian Painting), which shows a fine collection of art from the Qajar period. The portraits of the shahs wearing the jewels and crowns that tourists can see in the National Jewels Museum and pictures of daily life in Iran in the 19th century are particularly fascinating.

The Royal Museum (also called the Special Museum), a fascinating treasure chest of decorative art pieces and artifacts amassed by the shahs, is the next collection of rooms. 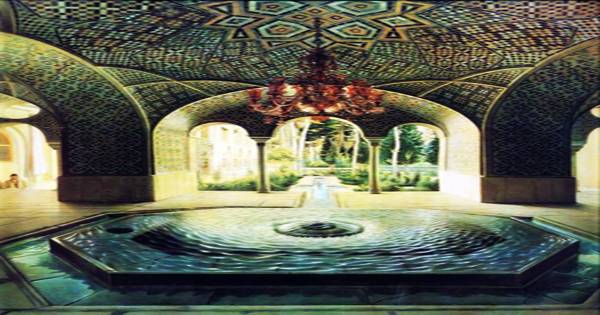 Works presented to the Qajar court by European painters are housed in the Pond Building. The Pond House was used as a summer chamber during the Qajar era. Water from a subterranean stream system was pumped into small ponds inside the chambers by a special cooling system. The mechanism was built to move through as many summer rooms as required. To irrigate the royal gardens, the water was then channeled outside. This method is no longer in operation because of the adverse effects of humidity. 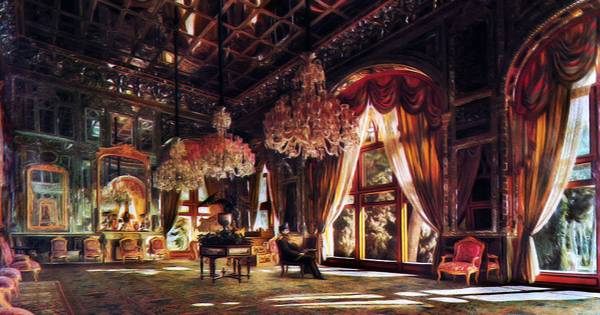 The main rooms, including the sparkling Talar-e Ayaneh, are the highlight of the palace (Mirror Hall). The Peacock Throne, built between 1874 and 1877, was housed here until it was transferred to the National Jewels Museum. It was used in 1967 (25 years after he came to power) for the coronation of Mohammad Reza Shah and for royal weddings. Today it houses presents, including a collection of green malachite table decorations from Russia and fine porcelain from France, Germany, and the UK, as well as two adjoining halls. 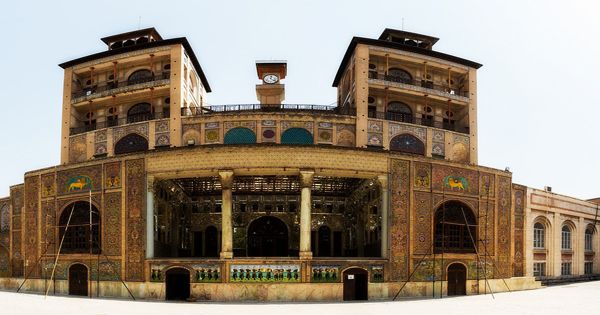 Shamsol Emare is one of the best places in the palace, where tourists can clearly see Iranian architecture mixing with European elements (Edifice of the sun). The King of Qajar wanted to have a large and comprehensive view of the capital, so he ordered the building of these towers. It was designed by master architect Moayer al-Mamalek and built between 1865 and 1867. There are two identical towers in the building; the exterior views include numerous arches, complex tile work, and ornate windows. This building’s two towers are in fact small versions of the Safavid viewing palace of Ālī Qāpū in Isfahan. Right now only the ground floor of this building is open for a visit.

Located in the southern wing of the Golestan Palace, next to the Windcatchers building is the Diamond Hall. Due to the exceptional mirror work inside the house, it is called Talar e Almas (“the Diamond Hall”). The more subdued teahouse and restaurant below could well be more desirable. This hall’s construction dates back to Fath Ali Shah’s time. This hall was restored by Nasser ed-Din Shah, altering its look and replacing the arches of the hall with Roman arches.

Finally, back near the entrance, the Ethnographic Museum houses the Abyaz Palace, featuring a collection of mannequins in traditional ethnic costumes. It is assumed that the structure was designed by Nasser ed-Din Shah himself, with a central hall wide enough to house a carpet sent by Sultan Abd ol Hamid.

The most outstanding building in the heart of historic Tehran is the Golestan Palace. It is bright, vivid, and full of aesthetically decorated figures made by talented Qajarian artists. In 2013, this elegant garden was registered on the UNESCO World Heritage List because it was built by combining Iranian fine art with European architecture and technology, which has become a phenomenon in the history and culture of Iran. The Golestan Palace, in its present state, is the culmination of around 400 years of building and renovation. It is officially run by the Organization of Iran’s Cultural Heritage.