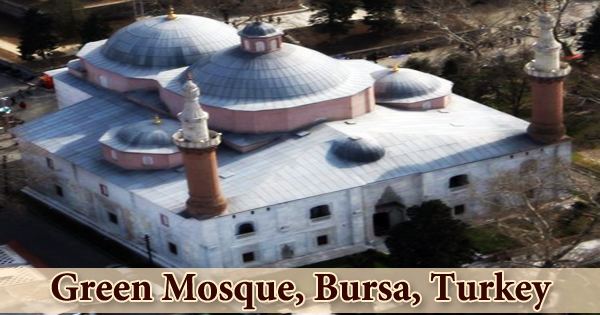 The Green Mosque (Turkish: Yeşil Camii), also known as the Mosque of Mehmed I, is a mosque and dervish lodge (zawiye) built by Ottoman sultan Mehmed I as part of a multi-functional complex (külliye or imaret). It’s a lovely mosque with a fantastic green hue to the tiles and exterior decoration, which contributes to the city’s name of “Green Bursa.” It is part of a larger complex (Turkish: külliye) on the east side of Bursa, Turkey, which served as the Ottoman Turks’ capital until 1453 when they conquered Constantinople. A mosque, türbe, madrasah, kitchen, and bath make up the complex.

The mosque’s name, which translates to “Green Mosque,” derives from its vibrant green and blue tilework. The dark green tiles continue to contrast with the white and gold design of recesses set in the walls, one for the Imam to offer sermons and others for other forms of prayers, inside the mosque. Because of the degree of aesthetic and technological mastery exhibited inside the mosque, the Green Mosque is often regarded as the pinnacle of early Ottoman architectural design. The mosque was built between 1419 and 1421/822-824 AH, according to inscriptions and endowment deeds, and is credited to architect Haci Ivaz Pasa.

Sultan Mehmet I Çelebi commissioned the Green Mosque, which was completed in 1424 and stands on a promontory overlooking the valley (now urban sprawl). After a fight with his brothers to reunite the Ottoman Empire, he ruled from 1413 to 1421. Mehmed I was buried in the Green Tomb, a mausoleum commissioned by his son and successor, Murad II, and located within the complex. After Mehmed I’s death, decorative work on the mosque continued. Following the earthquake of 1855/1271 AH, the building underwent substantial renovations. These restorations were supervised by French architect Leon Parveillée beginning in 1863/1280 AH.

The architect and patron of the arts vizier Hacı İvaz Pasha, who had served as a commander under Mehmed I, oversaw the building of the Green Mosque. The structure is shaped like a two-story cube with a qibla (south) side extension. In Anglophone scholarship, this is known as an inverted T plan. It’s made of sandstone and has marble panels on the sides. The supervisor of the interior tile decorations is identified by a calligraphic inscription as Nakkas (the Artist) Ali bin Ilyas Ali. A Persian inscription above the mosque’s mihrab mentions the “Masters of Tabriz.” As it was invaded by the Timurids in the fourteenth and fifteenth centuries, Tabriz, a prominent artistic and cultural center in western Iran, was a particularly important conduit through which Timurid influence reached the Green Mosque.

The north facade is divided into five sections: a central section with a monumental portal surmounted by an intricate muqarnas hood, flanked on either side by two bays with windows on each story. The two bays on either side are separated by a muqarnas niche on the first story. The entry portal and the windows that flank it are framed in marble with flower designs and scriptures, with a different design featured in the tympana of each window. The main entrance, made of richly carved marble, was once protected by a columned balcony, which was demolished, along with most of the mosque, by an earthquake in 1855. (The main part of the mosque was authentically rebuilt, but the porch was not.)

Above the portal, reached by a small staircase inside, is the sultan’s loge (hünkâr mahfili), decorated in gilded tiles, but usually not open to the public. Mehmet el-Mecnun is identified as the artist who decorated the mosque’s ceramics in a Persian inscription found within the royal loge. Two minarets rise from either side of the facade, later additions to the structure. The domes that rise above the cube and its southern extension are now covered in lead, but they were once covered in blue and green tiles, earning the mosque its name.

The Green Mosque, which was recently designated as a UNESCO World Heritage Site, is now a prominent tourist attraction in Bursa. The domed central hall of the mosque is flanked to the left and right by rooms that were used for both prayer and Ottoman government business. The main prayer hall is the space opposite the portal with the 15-meter (49-foot) high mihrab (prayer niche). There are two smaller iwans on the first floor that lead to corner rooms that are identical to those on the north side of the building and each have a fireplace. A longer east–west hallway intersects the central corridor, which runs north–south.

The Green Mosque is a two-story, cube-shaped building with an extension on the south side, with an inverted T-plan. The east-west hallways lead to two stairwells leading to the second floor, as well as wide corner rooms with fireplaces and windows overlooking the building’s main (north) facade and sides. Following the short north-south corridor, one enters a wide central chamber with an octagonal fountain topped by a glass lantern and surrounded by a dome (this replaces the original oculus).

A foyer can be found just past the Green Mosque’s entrance. Broad corridors, framed by Byzantine columns, stretch in both directions from here, leading to stairwells leading to the royal chambers. Two massive iwans, both domed and rising two feet, flank this chamber on either side (east and west), with two doors leading to corner rooms similar to those on the north side of the house, each with a fireplace. The winding stairways leading up to the lofts are located in these chambers. A passage leads from these corner rooms to the balconies on the northern façade, where the minaret steps begin.

A wide prayer hall iwan with a mihrab and two sets of four windows: one at ground level and one at clerestory level, is located on the south (qibla) side of the central court. Two tiny iwan-like rooms flank the portal leading into the space from the entrance hall on the north side. The lovely, harmonious octagonal Green Tomb (Yeşil Türbe) is located behind the mosque to the south. During restoration work in the 1800s, the tomb was coated in blue tiles. The mosque’s hewn sandstone edifice is covered in marble panels, the bulk of which were replaced in the nineteenth century.

The door is topped by a half-dome with a waterfall of muqarnas and arabesques and Rumi inscriptions on its face. An inscription dedicated to Hacı İvaz Pasha, the mosque’s designer, can be found above the niches on each side of the entrance door. A small window between the inscription and the muqarnas illuminates the route to the sultan’s box. The second story is only accessible from the north side of the complex through the stairwells off the east-west entrance hall. A landing in the shape of a narrow corridor leads to two small side rooms at the top of each flight of stairs.

The building’s domes were originally coated in blue and green tiles, but are now covered in lead. In the domes and on the external walls, there are openings pierced into drums. The mihrab is a large structure that rises from the south iwan’s floor to the base of the dome. It consists of a muqarnas niche with an inscription plaque atop it, all of which is framed in a rectangular field with concentric bands of tilework featuring vegetal motifs, geometric patterns, muqarnas, and an inscription band. At the time of restoration, the two minarets were equipped with stone spires carved in a baroque style. Just the sultan’s rooms and the winding stairs to the attics lead to them.

Visitors and locals alike frequent the mosque’s exterior, which offers spectacular views and easy access to tea rooms, making it a perfect place to rest and enjoy the area. Sharing space with the Green Tomb, the pair is an ideal spot to visit one of the city’s many landmarks that contribute to the city’s “green” reputation. Bursa’s Turkish & Islamic Arts Museum is located just down the hill to the west of the Green Mosque, and is housed in the historic medrese (theological college) that was once part of the mosque complex. It has a good selection of historical artifacts and is worth seeing only for the structure.