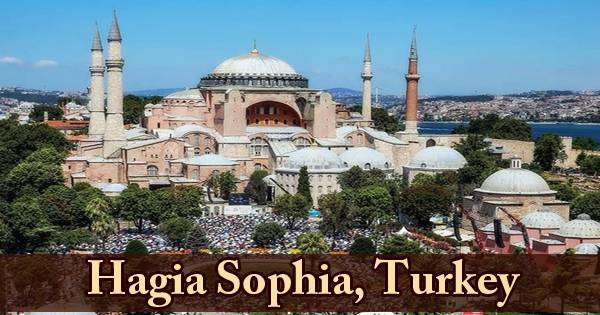 Hagia Sophia (/ˈhɑːɡiə soʊˈfiːə/; from Koinē Greek: Ἁγία Σοφία, romanized: Hagía Sophía; Latin: Sancta Sophia, lit. ‘Holy Wisdom’), officially the Hagia Sophia Grand Mosque (Turkish: Ayasofya-i Kebir Cami-i Şerifi) and formerly the Church of Hagia Sophia, is a domed monument originally built in Constantinople (now Istanbul, Turkey) as a cathedral in the 6th century A.D. It is also known as ‘Church of the Holy Wisdom’ or ‘Church of the Divine Wisdom’, an important Byzantine structure in Istanbul, Turkey, and one of the great monuments of the world. Turkey moved to turn the 1,500-year-old Hagia Sophia, a museum since 1934, into a mosque in mid-2020. Founded as an Orthodox cathedral and later used as a mosque for centuries, the awe-inspiring structure has been a focus for religious groups trying to revive it as a Muslim worship site in recent decades.

For any structure not made of steel, Hagia Sophia’s dimensions are formidable. It is about 82 meters (270 feet) long and 73 meters (240 feet) tall. The dome is 33 meters (108 feet in diameter and its crown rises about 55 meters (180 feet) above the pavement. With the minarets and inscriptions of Islam, as well as the luxurious mosaics of Christianity, the building represents the religious changes that have taken place in the area over the years. Established in the 6th century as the cathedral for the capital of the Eastern Roman Empire (also called the Byzantine Empire), the Hagia Sophia that stands today became a mosque in 1453 with the capture of Constantinople by the Ottomans. It remained a Muslim house of worship until 1934 when it was converted into a museum by the Turkish government. 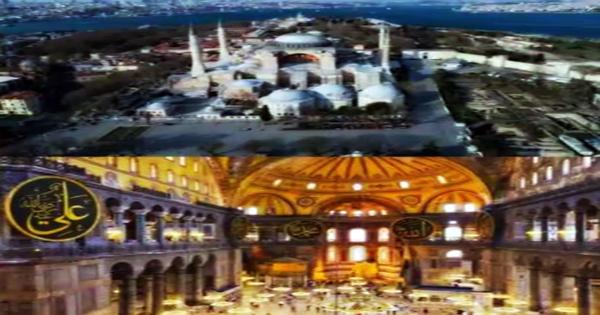 More than 50 years later, ‘Hagia Sophia’ was included by UNESCO as part of the Istanbul World Heritage Site Historic Site. The Greek geometers, Isidore of Miletus and Anthemius of Tralles, designed the building. The present Justinianic structure was the third church of the same name to occupy the site, having demolished the previous one in the Nika riots. As the Episcopal See of the Ecumenical Patriarch of Constantinople, it remained the largest cathedral in the world for almost a thousand years, until the completion of Seville Cathedral in 1520. It has operated as a cathedral, mosque, and now a museum in its 1,400-year life span. Constantinople was the Byzantine Empire’s capital when it was first founded. This kingdom, officially Christian, originally formed the eastern half of the Roman Empire and carried on after the fall of Rome.

The Hagia Sophia is a wholly original synthesis of a longitudinal basilica and a centralized building, with an immense 32-meter (105-foot) main dome supported by pendants and two semidomes, one on each side of the longitudinal axis. The building is almost square in style. Separated by columns with galleries above, there are three aisles and wide marble piers rise up to support the dome. The walls above the galleries and the base of the dome are perforated by windows that blind the supports in the glare of daylight and offer the appearance that the canopy floats in the air.

In order to conform with Islamic values, during Mehmed II’s rule of the Ottoman Empire from 1451 to 1481, many of Hagia Sophia’s sublime works of art were plastered over. The grand mosaics of six-winged angels and other Christian figures were replaced by bold flowing lines of Arabic calligraphy on hanging roundels and a beautiful marble mihrab, showing the direction of Mecca. The vast interior has an intricate structure. The nave is enclosed by a central dome that is 55.6 m (182 ft 5 in from the floor and stands on an arcade of 40 arched windows at its height. Repairs to its construction left the dome somewhat elliptical, ranging in diameter from 31.24 to 30.86 m (102 ft 6 in and 101 ft 3 in). 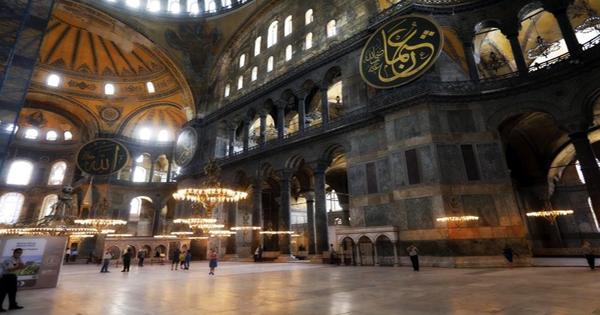 Arched openings extended by half domes of equal diameter to the central dome on the western entrance and eastern liturgical side, borne on smaller semi-domed exedrae; a hierarchy of dome-headed elements constructed to create a massive oblong interior crowned by the central dome, with a simple span of 76.2 m (250 ft). Staff undertook significant repairs following the naming of the museum, such as carefully chipping away plaster to expose hidden mosaics. Along with the high upper gallery, they can partly be seen sparkling with glints of gold tile.

The original church on Hagia Sophia’s site is said to have been ordered to be built on the foundations of a pagan temple by Constantine I in 325. It was consecrated by his son, Constantius II, in 360. The main entrance to the church was facing west, perhaps with gilded doors and an additional entrance to the east. There was a central pulpit, and there was presumably an upper gallery, likely employed as a matroneum (section of women). A fire that erupted during a riot following the second banishment of St. John Chrysostom, then patriarch of Constantinople, destroyed it in 404. By the Roman emperor Constans I, it was restored and expanded.

The interior surfaces of the cathedral were sheathed with polychrome marbles, purple porphyry in green and white, and gold mosaics. During renovations in the 19th century at the behest of the Fossati architects, the exterior was covered in stucco tinted yellow and red. The structure now standing is basically the building of the 6th century, although in 558 (restored 562) an earthquake caused a partial collapse of the dome and there were two more partial collapses, after which it was repaired to a smaller scale and the entire church strengthened from the outside. In the mid-14th century, it was restored once again.

It has operated as a cathedral, mosque, and now a museum in its 1,400-year life span. Constantinople was the Byzantine Empire’s capital when it was first founded. This kingdom, officially Christian, originally formed the eastern half of the Roman Empire and carried on after the fall of Rome. It has been the cathedral of the Ecumenical Patriarchate of Constantinople for more than a millennium. In 1204, the Venetians and the Crusaders of the Fourth Crusade plundered it. On 29th May 1453, Constantinople fell to the invading Ottoman forces; Sultan Mehmed entered the city and conducted Hagia Sophia’s Friday prayer and khutbah (sermon), which marked the formal conversion of Hagia Sophia into a mosque.

Although many travels to the historic building to gaze at its interior wonders, the exterior of the mosque is also worth exploring. Hagia Sophia’s four minarets, the Sibyan (elementary school fountain, the clock room, and the treasury building are iconic features of the daring architecture of the structure. Situated outside the house, the mausoleums of the Ottoman Sultans are equally fascinating to visit. The building was converted into a museum in 1935 by the first Turkish President and founder of the Republic of Turkey, Mustafa Kemal Atatürk. For the first time since the renovation of the Fossatis, the carpet and the layer of mortar underneath them were removed and marble floor decorations such as the omphalion emerged, while the white plaster covering many of the mosaics was removed.

Hagia Sophia was declared a part of the UNESCO World Heritage Site called the Historic Areas of Istanbul in 1985, which includes the other major historical buildings and locations of that city. Modern-day tourists will remember that there are two floors of the Hagia Sophia, the ground floor and a gallery above. The existence of the two levels may mean that when services were held at the cathedral, people were arranged according to gender and class. A controversial decision was taken by Turkish President Recep Tayyip Erdoğan in 2020 to transform the building back into a mosque. Shortly after the declaration, Islamic prayers with curtains partially concealing the Christian imagery of the building were conducted. 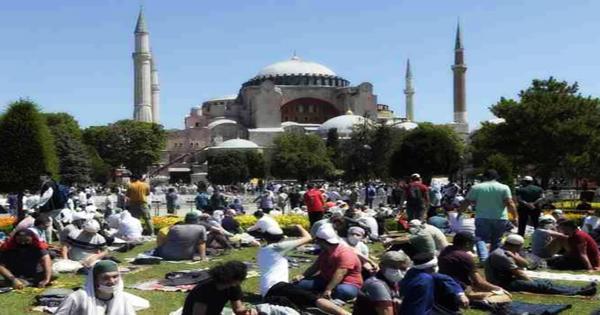 In 2020, Turkey’s government celebrated the 567th anniversary of the Fall of Constantinople with an Islamic prayer in Hagia Sophia. Hagia Sophia has remained open to tourists as Turkey’s most popular tourist destination. No entrance fee will be paid, according to the latest announcement made by the Turkish government, and all mosaics will be uncovered, except during worship, when the building will close an hour before the time of prayer and reopen half an hour later.