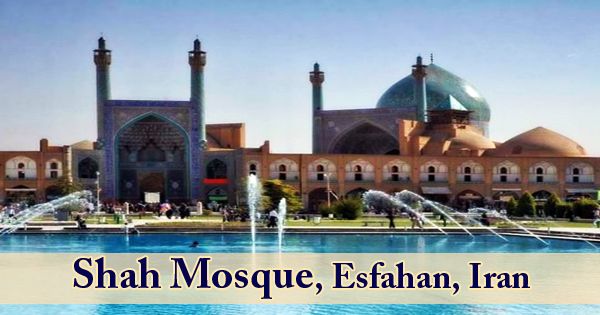 A mosque located in Isfahan, Iran is the Shah Mosque (Persian: مسجد شاه‎; “Royal Mosque”), also known as the Masjed-e Emām (Persian: ‘Imam Mosque’). The mosque was situated in the center of Eṣfahān, along a wide central mall (city square, or courtyard) called the Maydān-e Emām, part of the reconstruction effort of the Ṣafavid Shah ʿAbbās I (since 1979 a World Heritage site). The mosque is situated on Naghsh-e Jahan Square’s south side. According to the Persian Saying: “Isfahan is half the world”; amazing mosques, bridges, and lovely squares fill the city; in other words, this city will keep tourists busy for days.

In 1597, Shah Abbas relocated the capital of the Safavid dynasty to Isfahan with the intention of focusing on political social, economic, and cultural activities, shifting the center of Isfahan away from the area around the old Friday mosque in the north and bringing it closer to the Zayandeh River. The mosque (Shah Mosque) is considered one of the masterpieces of the Islamic age of Persian architecture. The Royal Mosque is registered as a UNESCO World Heritage Site, along with Naghsh-e Jahan Square. The Masjid-i Shah was the largest architectural memorial to Shah ‘Abbas. The monumental Iwan portal of the mosque is situated exactly opposite the Iwan portal on the Maydan’s northern arcade, which connects the Maydan to the old bazaar to the north. 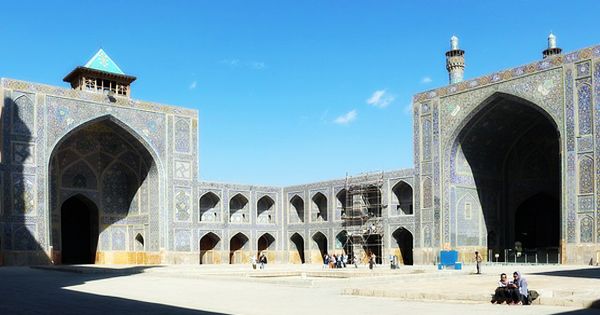 The construction of the mosques began in 1611 and was completed around 1630, during the rule of Shah Safi, the successor of Abbas, who ruled from 1629 to 1642. The uniqueness of its seven-color mosaic tiles and calligraphic inscriptions is due primarily to its splendor. Later, in 1638, the structure was integrated with marble dadoes. From the inscriptions installed on the structure, which recognize Badi’ al-Zaman Tuni as responsible for the building plans and site arrangement,’ Ali Akbar Isfahani as the architect, and Muhibb’ Ali Beg as the general contractor, much is known about the people involved in the construction of the mosque. On the reverse of the Iranian 20,000 Rials banknote, the mosque is depicted.

Visitors can find a stone under the central dome, right in the middle, that doesn’t fit the stone around it. This stone marks a major acoustic point in the mosque of the Shah. The sound echoes loudly through the rest of the building from here, allowing the imam to speak at a lower level, so everyone in the mosque can still hear it. Completed by the Seljuq dynasty and inherited by the Safavids, the four-iwan format firmly established the courtyard façade of such mosques, with the towering gates on all sides, as being more important than the actual building itself. One enters the mosque from the middle of the southern wall of the Maydan, via a recessed vestibule, where the main entrance to the mosque is situated on the southern wall of the vestibule. On its two other sides (east and west), this area connects to the corridor of the Maydan, which runs behind its commercial facilities.

Islamic architecture thus witnessed the advent of a new brand that differed from the early Arab mosques, such as the Umayyad Mosque’s hypostyle design. The four-iwan format usually took the form of a central courtyard with wide entrances on each side, square-shaped, giving the appearance of being gates to the spiritual world. The rectangular form of the rest of the mosque (100 by 130 meters) is rotated 45 degrees to orient it toward Mecca, where the qibla wall is placed. The main portal is linked to a triangular vestibule to achieve this orientation towards Mecca, connecting it to the courtyard of the mosque through the space behind the northeastern iwan. 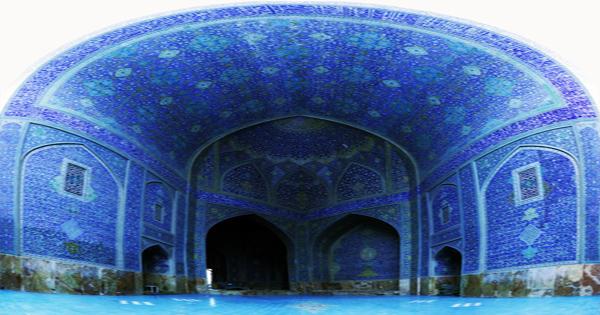 (Interior of the main prayer hall in Shah Mosque)

Two 42-meter-high minarets rise on the tops, topped by beautifully carved wooden balconies with muqarnas running down the sides. A small pool and a resting place for the horses stood in the middle, in front of the entrance, and inside the worshipers found a large marble basin set on a pedestal, filled with freshwater or lemonade. This basin is still as it has been for 400 years, but at Friday prayers it no longer serves the purpose of offering refreshments to the worshipers. The mosque’s plan, however, poses an interesting variation: a domed chamber is behind each lateral iwan (on the northwest and southeast). The domed sanctuary behind the southwest iwan is flanked by rectangular rooms that act as winter prayer halls that are entered from the domed sanctuary aligned on the northeast-southwest axis (36 meters by 18 meters each).

One enters the main courtyard after going through the entrance portal, built around a wide pool. At the far end, the two gateways (iwans) on the sides direct one’s attention to the main gateway, the only one with minarets, and the lofty dome with its colorful ornamentation behind it. The halls are protected by eight domes and link to two rectangular arcaded courts serving as madrasas (22 by 44 meters each), which are both aligned on the northeast-southwest axis and accessible only from the domed chambers behind the iwans of the southeast and northwest. The direction of Mecca was indicated by the mihrab, a massive marble tablet ten feet tall and three feet broad on the southwestern wall. The iwan that pointed east from the main courtyard housed a religious school or madrasa.

Both the main iwan portal, overlooking the maydan, and the iwan sanctuary are flanked 34 meters high by a pair of towering cylindrical minarets. Tile mosaics with epigraphic elements are decorated with these minarets. Domes appeared often in the architecture of mosques after the introduction of domes into Islamic architectural designs by Arabs during the 7th century. An inscription band in white on a blue background runs on top of its upper region, marking the beginning of three levels of units of muqanas, each unit outlined with yellow lines and inscribed mainly in blue with a floral arabesque. These muqarnas tend to carry the roofed balcony of the minaret, which wraps around a narrower cylindrical center than the minaret’s lower shaft. 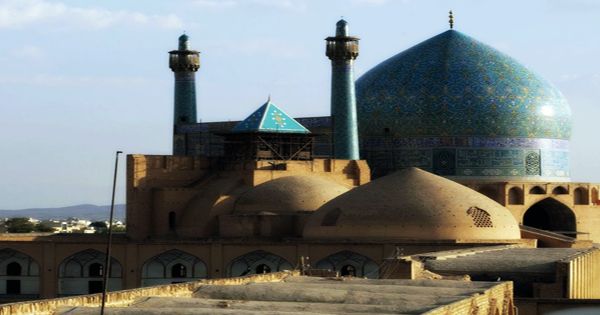 The Masjed-e Shah was an immense building, said to have 18 million bricks and 475,000 tiles, costing 60,000 tomans for the Shah to construct. The bulbous dome is covered on the outside with a spiraling arabesque beige on a light blue backdrop. On a high drum and a sixteen-sided transitional zone, the dome rises. The dome of the Masjed-e Shah, reaching 53 meters in height, was to become the tallest in the city when it was completed in 1629. It was designed as a double-shelled dome spanning 14 meters between the two layers, sitting on an octagonal chamber of the dome. At the apex, the interior of the dome is ornamented by a sunburst from which arabesque levels descend. The eight domes are decorated with mosaic tile work with concentric medallions in floral motifs in each of the prayer halls adjacent to the domed sanctuary. From undecorated octagonal columns that divide the space of these halls into eight bays, the arches on which these domes rest ascend.

The Masjed-e Emām is notable, along with the three neighboring structures of the time, for its logically precise vaulting and imaginative use of colored tiles. The port of the mosque is 27 m (89 ft) high, crowned with two 42 m (138 ft) tall minarets. The most majestic iwan in the mosque is 33 m (108 ft) tall, facing the Qibla. The room behind this iwan is roofed with the largest dome in the city at an altitude of 53 m (174 ft). Following the 1979 Iranian Revolution, the mosque was renamed. Water is an important element of design; pools at the center of both the main court and the courts of the madrasas represent the architectural splendor of the Masjid-i Shah.