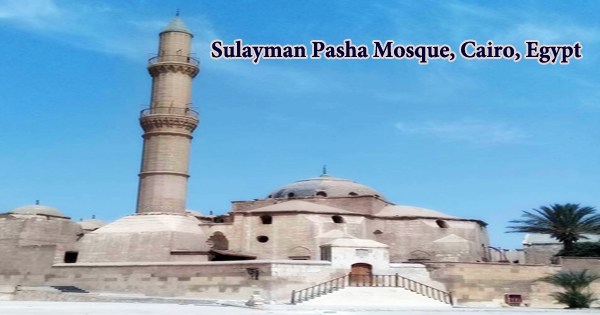 Built-in 1528 by the governor for the use of the Janissaries quartered in the northern enclosure, Sulayman Pasha al-Khadem Mosque (Arabic: مسجد سليمان باشا الخادم‎), also known as Sariat al-Jabal Mosque, was the first erected in Egypt under Ottoman authority. It was built for the benefit of the jannisaries stationed in the northern enclosure and is located inside the Cairo Citadel at the top of Mount Mokattam. It is Egypt’s first mosque to be built in the Ottoman architectural style. Suliman Pasha was the administrator of Egypt during the Ottoman Empire and later became a Wali (ruler). The mosque was built near the Salah El Din Citadel on the northern side.

Sulayman Pasha was inspired by mosques in Istanbul, Turkey, including the Suleymaniye Mosque (completed in AH 965 / AD 1558). Domes, semi-domes, pencil-shaped minarets, and ceramic-tile revetment on the interior walls are all hallmarks of Ottoman architecture. Many believed that no statesman could replace Ibrahim Pasha before his ascension; he was regarded as a brilliant leader who handled state matters with ease and agency. Hadim Suleiman Pasha, however, rose up the ranks after Ibrahim Pasha’s death, owing to his focus on securing control of the Red Sea and the Persian Gulf.

The Suleiman Pasha Mosque is a free-standing structure with a central dome that is one of the greatest examples of Ottoman design from the 16th century. The mosque was built on the ruins of an older mosque, Abu Mansur Qusta, which had been built by the ruler of Alexandria during the Fatimid period in 1141 and had existed before the citadel was built. The mosque was built for the Janissaries, an Ottoman army troop formation that entered Egypt in AH 922 / AD 1517 under Sultan Salim (r. AH 918–26 / AD 1512–20) and lived within the citadel’s northern walls.

After a substantial chunk of the old Mosque of al-Nasir Muhammad ibn Qalawun was demolished and was no longer appropriate for worship, the new mosque was built. The Sulayman Pasha mosque is an example of the Ottoman empire’s architectural innovations blending together in Egypt. Throughout Egypt, both indirect and direct architectural improvements from the Ottoman period could be seen. The architect Mimar Sinan rose to prominence during the Ottoman empire’s golden period, introducing several inventive ideas that inspired the rest of the Islamic world and architecture in general.

The mosque’s plan and profile are essentially Ottoman. The prayer hall is designed in the Ottoman T-form and is topped by a small central dome bordered by three semidomes. A courtyard stands in front of the building, which is enclosed by domed arcades. The Mamluk style impacted mosque building considerably before the Ottoman period began. While other countries of the Islamic world, such as then-Syria, were able to accept the Ottoman style, it was initially difficult for Egypt to immediately embrace and assimilate Ottoman aspects. This was due to the fact that Egypt, and specifically Cairo, was the epicenter of the Mamluk Sultanate’s golden age. As a result, the Sulayman Pasha mosque featured both Ottoman and Cairene architectural characteristics when it was completed.

The mosque’s main entrance is on the southwestern side. It has a protruding doorway with stone steps leading up to it. The exterior door, which is capped by a circular arch, is reached through steps. To the left of the southwestern façade is the minaret. It has a square base with beveled corners and a cylindrical body with two wooden balconies surrounding it. Three levels of muqarnas support each balcony. The minaret’s top is capped with a conical finial in the shape of a pencil, and the mosque’s central dome is covered in green-glazed tiles.

The Mosque is shaped like a rectangle. The prayer hall occupies one half of the structure, while the courtyard occupies the other. The entrance, unlike those of most Ottoman mosques, leads directly to the prayer hall. The marble covered Mihrab and the sculptures on the balcony are reminiscent of Mamluk architecture. The mosque’s domes are entirely covered in green qashani geographic patterns. The central dome has botanical ornamentation and is supported by spherical pendentives. A marble platform and a mihrab can be found in the middle of the eastern wall. There are two iwans in this region specifically: the first has embellishments intermingled with diverse texts, including Qur’anic verses.

The minaret, which is placed to the right of the entrance façade and has a cylindrical, faceted shaft crowned by a conical finial, is also Ottoman in design. Overlooking the little mosque, it is raised to a comparably large height. This mosque’s floor plan comprises of a prayer hall with a central dome and semi-domes surrounding it. A wide, square open courtyard precedes it, which is encircled by four colonnades with little shallow domes. Inside the mosque, there is also a carved and painted marble pulpit perched atop the conical top. The marble floor in the interior includes geometric designs as well.

The inside is decorated with marble revetment, inscriptions, painting, and exquisite stucco, and replicates the outer Ottoman form with the dome resting on spherical pendentives. The shaft of the minaret is extremely tall, measuring double the height of the tallest mosque wall. The minaret has a cylindrical faceted shaft with a conical finial, and is mostly in the Ottoman architectural style. The inner annexes of the mosque, such as the ablutions and water provision sections, are accessible through a door in the northeastern wall.

The four arched niches on the northwestern wall, which faces the qibla wall, include one with a window and another with a door leading to the mosque courtyard. On the pinnacle of the minaret, there is a green-paneled cone. These panels were made in Sultan Qansuh al-ceramic Ghawri’s workshop. On the western side, the courtyard precedes the prayer hall, while the dikkat al-muballigh, an elevated platform from which the daily prayers are recited to worshippers, crowns the front of the northwestern wall. Ten wooden brackets support the dikkat al-muballigh.

The mosque is built in the shape of a rectangle from the exterior. On the rest of the structure, it portrays 9 smaller domes. A shrine from the Fatimid period, restored with its entrance incorporated within the court’s arcades, is another element of the complex. It was built circa 1140 by Abu Mansur Qasta, the governor of Alexandria, to house his grave and was dedicated to Sidi Sariya, a companion of the Prophet, thus the mosque’s popular name.

A tiny dome with multiple tombs featuring marble structures can be found on the courtyard’s western side. Different styles of headstones that were popular at the period are used to cover tombs. To the north of the mosque, a second court with two halls that make up a kuttab was built. Blue tiles were used to cover the kuttab’s domes. A sabil, which is no longer standing, and a perimeter wall that covers other, secondary courts and gardens completed the complex.