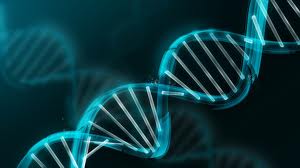 Instructions that provide almost all of the information necessary for a living organism to grow and function are in the nucleus of every cell. These instructions tell the cell what role it will play in your body. The instructions are in the form of a molecule called deoxyribonucleic acid, or DNA.

DNA is the chemical responsible for preserving, copying and transmitting information within cells and from generation to generation.

In humans, the DNA molecule consists of two ribbon-like strands that wrap around each other, resembling a twisted ladder. This is often described as a double helix. DNA is contained in tightly coiled packets called chromosomes, found in the nucleus of every cell. Chromosomes consist of the double helix of DNA wrapped around proteins. The DNA molecule contains genes that direct the production of proteins.

Proteins are molecules that play a critical role in the structure, function, and regulation of your body’s cells, tissues, and organs. Every protein is made up of a chain of building blocks called amino acids. The code that is carried by DNA determines which amino acids will come together in what order to form a given protein. Genes act, or “express,” themselves by dictating the order of amino acids used to make proteins.

The twisted ladder is made up of repeating units called nucleotides, each of which is a single building block of DNA. Nucleotides are composed of one sugar-phosphate molecule (the linear strands or outer rails of the ladder) and one base. DNA consists of two nucleotide strands joined by weak chemical bonds between the two bases, forming base pairs. A base pair is a rung or step on the ladder of the DNA. The bases are called A (for adenine), C (for cytosine), T (for thymine) and G for guanine.

DNA, or deoxyribonucleic acid, is the hereditary material in humans and almost all other organisms. Nearly every cell in a person’s body has the same DNA. Most DNA is located in the cell nucleus (where it is called nuclear DNA), but a small amount of DNA can also be found in the mitochondria. Each gene carries a separate piece of information. An inherited trait of an individual can be determined by one gene, but is usually determined by the interaction of many different genes.

A single gene can influence more than one trait (characteristics).  A human cell contains many thousands of different genes coding for many different traits.  Changes in the sequence of the DNA molecule and therefore the gene are called mutations.  A mutation may change the manner in which a trait is expressed by an organism.