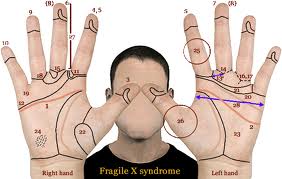 Fragile X syndrome is a genetic syndrome that is the most widespread single-gene cause of autism and inherited cause of mental retardation among boys. It results in a spectrum of intellectual disabilities ranging from mild to severe as well as physical characteristics such as an elongated face, large or protruding ears, and large testes (macroorchidism), and behavioral characteristics such as stereotypic movements.

Fragile X syndrome (also called Fragile X) is the most common inherited form of mental retardation. It results from a change, or mutation, in a single gene, which can be passed from one generation to the next. Fragile X appears in families of every ethnic group and income level.

Fragile X syndrome is caused by a change in a gene called FMR1. A small part of the gene code is repeated on a fragile area of the X chromosome. The more repeats, the more likely there is to be a problem.

The FMR1 gene makes a protein needed for your brain to grow properly. A defect in the gene makes your body produce too little of the protein, or none at all.

Boys and girls can both be affected, but because boys have only one X chromosome, a single fragile X is likely to affect them more severely. You can have fragile X syndrome even if your parents do not have it

A family history of fragile X syndrome, developmental problems, or intellectual disability may not be present. ¢ Delay in crawling, walking, or twisting

¢ Physical signs may include:

¢ Large forehead or ears with a prominent jaw

There is no specific treatment for Fragile X syndrome. Instead, training and education have been developed to help affected children function at as high a level as possible

FMRP is found throughout the body, but in highest concentrations within the brain and testes. It appears to be primarily responsible for selectively binding to around 4% of mRNA in mammalian brains and transporting it out of the cell nucleus and to the synapses of neurons. Most of these mRNA targets have been found to be located in the dendrites of neurons, and brain tissue from humans with FXS and mouse models shows abnormal dendritic spines, which are required to increase contact with other neurons. The subsequent abnormalities in the formation and function of synapses and development of neural circuits result in impaired neuroplasticity, an integral part of memory and learning.

In addition, FMRP has been implicated in several signalling pathways that are being targeted by a number of drugs undergoing clinical trials. The group 1 metabotropic glutamate receptor (mGluR) pathway, which includes mGluR1 and mGluR5, is involved in mGluR-dependent long term depression (LTD) and long term potentiation (LTP), both of which are important mechanisms in learning. The lack of FMRP, which represses mRNA production and thereby protein synthesis, leads to exaggerated LTD. FMRP also appears to affect dopamine pathways in the prefrontal cortex which is believed to result in the attention deficit, hyperactivity and impulse control problems associated with FXS. The downregulation of GABA pathways, which serve an inhibitory function and are involved in learning and memory, may be a factor in the anxiety symptoms which are commonly seen in FXS.