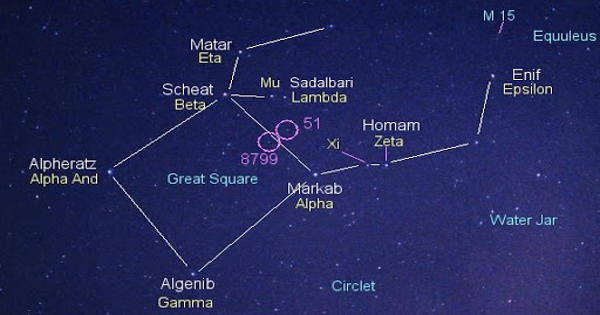 51 Pegasi formally named Helvetios, is a Sun-like star located 50.45 light-years (15.47 parsecs) from Earth in the constellation of Pegasus. It is the fifth-magnitude star located 48 light-years away from Earth in the constellation Pegasus, the first sunlike star confirmed to possess a planet. It was the first main-sequence star found to have an exoplanet (designated 51 Pegasi b, officially named Dimidium, formerly unofficially dubbed Bellerophon) orbiting it. The first exoplanet discovered around a sun-like star, 51 Pegasi b made us question what we knew of our universe and launched the search for new worlds.

51 Pegasi, which has physical properties (luminosity and temperature, for example) very similar to those of the Sun, became the focus of attention in 1995 when Swiss astronomers Michel Mayor and Didier Queloz announced the detection of a planet orbiting it. The star is of apparent magnitude 5.49, and so is visible with the naked eye under suitable viewing conditions.

51 Pegasi was listed as a standard star for the spectral type G2IV in the 1989 The Perkins catalog of revised MK types for the cooler stars. It is a gas giant exoplanet that orbits a G-type star. Historically it was generally given a stellar classification of G5V, and even in more modern catalogues it is usually listed as a main-sequence star. Such planets were completely unexpected, so it took astronomers a while to accept them. And they’re still trying to explain how such planets exist.

The extrasolar planet is not visible from Earth, but its presence was deduced in 1995 from the wobble that its gravity induces in the parent star’s motion in a 4.23-day cycle. It is generally considered to still be generating energy through the thermonuclear fusion of hydrogen at its core, but to be in a more evolved state than the sun. The effective temperature of the chromosphere is about 5571 K, giving 51 Pegasi the characteristic yellow hue of a G-type star.

It is estimated to be 6.1–8.1 billion years old, somewhat older than the Sun, with a radius 24% larger and 11% more massive. Its mass is 0.46 Jupiters, it takes 4.2 days to complete one orbit of its star, and is 0.0527 AU from its star. The star has a higher proportion of elements other than hydrogen/helium compared to the Sun; a quantity astronomers term a star’s metallicity. Stars with higher metallicity such as this are more likely to host planets. In 1996 astronomers Baliunas, Sokoloff, and Soon measured a rotational period of 37 days for 51 Pegasi.

The planet is about half as massive as Jupiter, the giant of our own solar system. Although the star was suspected of being variable during a 1981 study, subsequent observation showed there was almost no chromospheric activity between 1977 and 1989. Because of that, it’s been given the formal name Dimidium — Latin for “half.” But it’s only a few million miles from 51 Peg, so it’s extremely hot. Further examination between 1994 and 2007 showed a similar low or flat level of activity. Under especially dark skies, 51 Peg is just visible to the unaided eye.