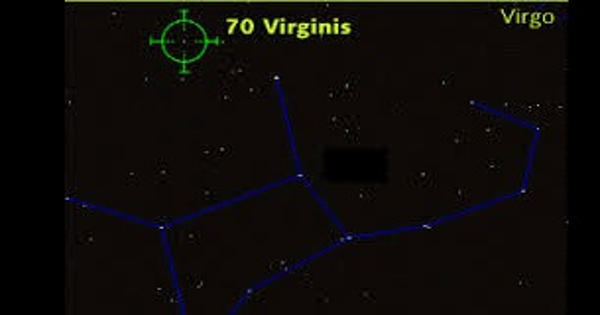 This object has a stellar classification of G4 V-IV, being rather unusually bright for a main sequence star of its type and thus may be just starting to evolve into the subgiant phase. However, its luminosity of about three times solar suggests a mass some 10-20 percent greater than solar. It is an estimated 7.9 billion years old and is spinning with a projected rotational velocity of 4.8 km/s. The star has 1.12 times the mass of the Sun and 1.9 times the Sun’s radius. The class is uncertain; the star is sometimes listed as G4 or G5, consistent with the cooler temperature. It is radiating 2.92 times the luminosity of the Sun from its photosphere at an effective temperature of 5,406 K. The metallicity – a term astronomers use to describe the abundance of elements heavier than helium – is near solar.

70 Virginis is not as big or hot as Earth’s Sun. The star is visible to the naked eye as a faint, yellow-hued point of light with an apparent visual magnitude of +4.97. It is drifting further away with a heliocentric radial velocity of +4.4 km/s and has a high proper motion, traversing the celestial sphere at the rate of 0.621 arc seconds per annum. 70 Virginis is situated close to the celestial equator, as such, it is at least partly visible from both hemispheres in certain times of the year. It is a gas giant exoplanet that orbits a G-type star. Its mass is 7.49 Jupiters, it takes 116.7 days to complete one orbit of its star, and is 0.481 AU from its star.

In 1996, 70 Virginis was found to have an extrasolar planet in orbit around it. There is also a dust disc that orbits the star. 70 Virginis visual magnitude is 4.98. Because of its moderate brightness, 70 Virginis should be easily visible from locations with dark skyes, while it can be barely visible, or not visible at all, from skyes affected by light pollution. The temperature of the disc is 156 K and it is about 3.4 AU from the star.