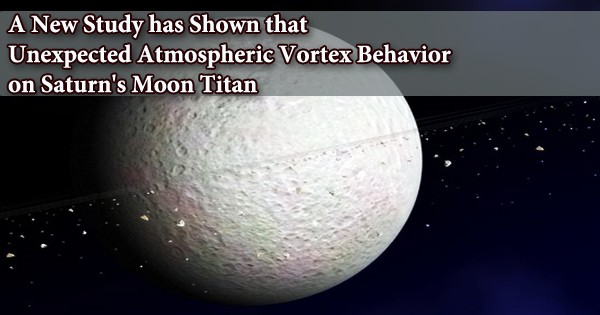 Titan’s polar atmosphere has lately seen an unexpected and substantial cooling, which defies all model projections and contrasts with the behavior of all other terrestrial planets in our solar system. Titan is larger than the planet Mercury, making it the biggest of Saturn’s more than 60 known moons. It is also the only moon with a significant atmosphere that has been discovered. In fact, the air pressure near Titan’s surface is around 60% higher than that of Earth. The high altitude polar atmosphere of a planet’s winter hemisphere is usually warm because sinking air is compressed and heated, similar to how a bicycle pump works.

Titan’s atmospheric polar vortex, on the other hand, appears to be exceedingly frigid. The Cassini spacecraft took a lengthy sequence of images of Titan’s polar atmosphere using the Composite Infrared Spectrometer (CIRS) instrument before its catastrophic destruction in Saturn’s atmosphere on September 15, covering nearly half of Titan’s 29.5 Earth-year long years.

While the expected arctic hot spot did emerge at the start of winter in 2009, it quickly turned into a cold region in 2012, with temperatures as low as 120 K recorded until late 2015. Only in the most recent data from 2016 and 2017 has the predicted hotspot reappeared.

Lead author Dr Nick Teanby from the University of Bristol’s School of Earth Sciences said: “For Earth, Venus, and Mars, the main atmospheric cooling mechanism is infrared radiation emitted by the trace gas CO2 and because CO2 has a long atmospheric lifetime it is well mixed at all atmospheric levels and is hardly affected by atmospheric circulation.”

“Exotic photochemical processes in Titan’s atmosphere, on the other hand, create hydrocarbons like ethane and acetylene, as well as nitriles like hydrogen cyanide and cyanoacetylene, which supply the bulk of the cooling.”

The presence of such gases in the upper atmosphere results in a strong vertical gradient. This means, even little vertical atmospheric circulations are required for their abundance. As a result of winter polar sinking, significant increases in these radiatively active gasses were seen across the southern winter shaft. As a result, large enrichments of these radiatively active gases occurred over the southern winter pole due to winter polar sinking.

Researchers utilized Cassini data to show that trace gas enrichment was big enough to produce considerable cooling and extremely frigid air temperatures, as well as a numerical radiative balance model of heating and cool rates. This explains Cassini’s cameras’ discovery of unusual hydrogen cyanide ice clouds above the pole in 2014.

Dr Teanby added: “This effect is so far unique in the solar system and is only possible because of Titan’s exotic atmospheric chemistry. A similar effect could also be occurring in many exoplanet atmospheres having implications for cloud formation and atmospheric dynamics.”