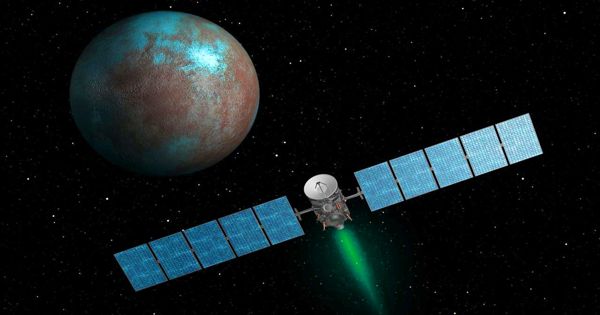 A physicist has proposed a new type of rocket thruster that could transport humans to Mars and beyond. The device would use magnetic fields to cause plasma particles to shoot out the back of a rocket and propel it forward.

The device would use magnetic fields to cause particles of plasma, an electrically charged gas also known as the fourth state of matter, to shoot out the back of a rocket and propel the craft forward due to momentum conservation. Electric fields are used to propel particles in current space-proven plasma thrusters.

The new concept would use magnetic reconnection to accelerate the particles, a process found throughout the universe, including the surface of the sun, in which magnetic field lines converge, suddenly separate, and then rejoin, producing a lot of energy. Reconnection also occurs inside tokamaks, which are doughnut-shaped fusion devices.

A new type of rocket thruster that could take humankind to Mars and beyond has been proposed by a physicist at the U.S. Department of Energy’s (DOE) Princeton Plasma Physics Laboratory (PPPL).

“I’ve been cooking this concept for a while,” said Fatima Ebrahimi, PPPL Principal Research Physicist and author of a paper detailing the idea in the Journal of Plasma Physics. “I had the idea in 2017 while sitting on a deck and thinking about the similarities between a car’s exhaust and the high-velocity exhaust particles produced by PPPL’s National Spherical Torus Experiment (NSTX),” the precursor to the laboratory’s current flagship fusion facility. “During its operation, this tokamak produces magnetic bubbles called plasmoids that move at around 20 kilometers per second, which seemed to be a lot like thrust.”

Fusion, the power that powers the sun and stars, combines light elements in the form of plasma to generate massive amounts of energy. Plasma is a hot, charged state of matter composed of free electrons and atomic nuclei that accounts for 99 percent of the visible universe. Scientists are attempting to replicate fusion on Earth in order to generate an almost infinite supply of power for electricity generation.

Current plasma thrusters, which use electric fields to propel particles, can only generate a low specific impulse, or speed. However, computer simulations on PPPL computers and the National Energy Research Scientific Computing Center, a DOE Office of Science User Facility at Lawrence Berkeley National Laboratory in Berkeley, California, revealed that the new plasma thruster concept can generate exhaust at speeds of hundreds of kilometers per second, ten times faster than other thrusters.

According to Ebrahimi, the faster velocity at the start of a spacecraft’s journey could bring astronauts closer to the outer planets. “Long-distance travel takes months or years because the specific impulse of chemical rocket engines is extremely low, so the craft takes a long time to get up to speed,” she explained. “However, if we develop thrusters based on magnetic reconnection, we may be able to complete long-distance missions in less time.”

There are three primary distinctions between Ebrahimi’s thruster concept and other devices. The first is that the strength of the magnetic fields can be changed to increase or decrease the amount of thrust. “You can effectively turn a knob to fine-tune the velocity by using more electromagnets and magnetic fields,” Ebrahimi explained.

Second, the new thruster generates motion by ejecting plasma particles as well as magnetic bubbles known as plasmoids. The plasmoids provide propulsion power, and no other thruster concept incorporates them.

Third, unlike current thruster concepts that rely on electric fields, Ebrahimi’s concept uses magnetic fields to allow the plasma inside the thruster to be made up of either heavy or light atoms. This adaptability allows scientists to tailor the amount of thrust for a specific mission. “Whereas other thrusters require heavy gas made of atoms such as xenon, this concept allows you to use any type of gas you want,” Ebrahimi explained. In some cases, scientists may prefer light gas because smaller atoms can move faster.

This concept broadens PPPL’s space propulsion research portfolio. Other projects include the Hall Thruster Experiment, which began in 1999 by PPPL physicists Yevgeny Raitses and Nathaniel Fisch to investigate the use of plasma particles for spacecraft movement. Raitses and students are also investigating the use of tiny Hall thrusters to improve the maneuverability of small satellites known as CubeSats as they orbit the Earth.

Ebrahimi emphasized that her thruster concept is directly related to her fusion energy research. “This work was inspired by previous fusion work, and this is the first time plasmoids and reconnection have been proposed for space propulsion,” Ebrahimi explained. “The next step is to create a prototype!”