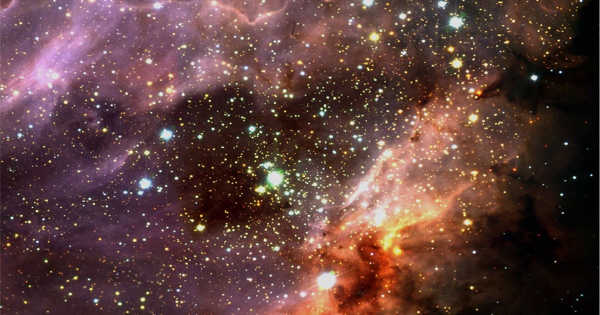 AFGL 2298, also known as IRAS 18576+0341, is a bright blue variable star (LBV) in the constellation Aquila, near the galactic plane. Its distance from the Earth is unknown; it could be anywhere between 23,000 and 42,000 light-years (7,000 to 13,000 parsecs). Despite being extremely luminous, it is extremely reddened by interstellar extinction, so its apparent magnitude is brighter in longer-wavelength passbands; in fact, it is completely undetectable in visual wavelengths.

LBV nebulae have previously been studied extensively in the optical regime, allowing for a detailed analysis of their chemistry, morphology, and kinematics. Expansion velocities indicate a dynamical age of only a few 104 years, indicating a very brief phase. LBVs are indeed rare objects, with only 40 confirmed LBVs known in the Local Group so far.

Luminous Blue Variables (LBVs) are bright, massive stars that are extremely rare in our Galaxy. This is primarily due to the extremely short timescales involved in the transition phase of stellar evolution that leads to the Wolf-Rayets stage, as well as the presence of a thick circumstellar envelope that makes observations of the central object difficult. Humphreys and Davidson provide an overview of their characteristics (1994). The infrared source IRAS 18576+0341, which was previously classified as a Planetary Nebula, is now recognized as a new LBV due to the observed strong photometric and spectroscopic variability, as well as its position in the HR diagram.

AFGL 2298, like most extremely massive stars, is losing mass. In 2005, for example, it was estimated that the Earth was losing 3.7×10-5 solar masses per year, though the rate of mass loss itself varies frequently and dramatically. The stellar mass is being ejected as a nebula around the star (similar to AG Carinae, which was imaged by the Very Large Telescope in 2010). The nebula was discovered to be fairly circular, and the dust properties appeared to be consistent throughout the nebula.