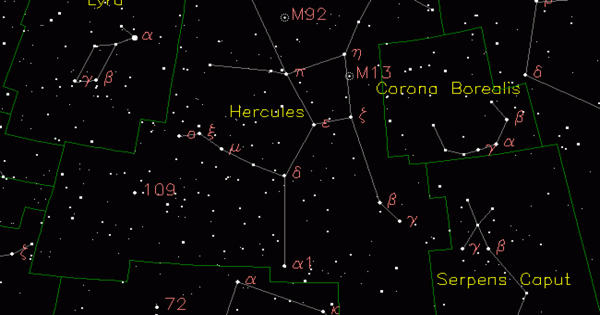 Alpha Herculis – the brightest star in the Hercules constellation

Alpha Herculis, is a red giant star. It is the brightest star in the Hercules constellation. It is actually the 129th brightest in the night sky. It is a multiple-star system in the constellation of Hercules. Its traditional name of Rasalgethi is derived from an Arabic phrase meaning, ‘the head of the Kneeler’.

Appearing as a single point of light to the naked eye, it is resolvable into a number of components through a telescope. It is located approximately 360 light-years from Earth in the constellation of Hercules. It has a combined apparent magnitude of 3.08, although the brightest component is variable in brightness. When viewed through a telescope, Alpha Herculis is actually two components; however, they are separated by five times the distance from Earth to the Sun. Based on parallax measurements obtained during the Hipparcos mission, it is approximately 360 light-years (110 parsecs) distant from the Sun.

Alpha Herculis is a triple star system. The primary star in this system is catalogued as a bright red giant and also a semi-regular variable. The primary (brightest) of the three stars, designated α1 Herculis or α Herculis A, is a pulsating variable star on the asymptotic giant branch (AGB), and is the second nearest AGB star after Mira. It is estimated to have 7 to 8 solar masses and is called, Alpha-1 Herculis. The primary star forms a visual binary pair with a second star, which is itself a spectroscopic binary. In addition, this huge red giant is reaching the end of its life-cycle and therefore is experiencing an increase in stellar mass loss.

The second component (Alpha-2 Herculis) is a binary star composed of a yellow giant and a yellow-white dwarf. Alpha Herculis also forms the A and B components of a wider system designated WDS J17146+1423, with two additional faint visual companions designated WDS J17146+1423C and D. Alpha-1 and Alpha-2 are separated by 500 astronomical units and complete a rotation around one another about every 3,600 years. The two fainter stars are far more distant than the triple system.

Alpha Herculis A and B are more than 500 AU apart, with an estimated orbital period of approximately 3600 years. It can be seen with the naked eye and is situated in its home constellation in the third quadrant of the Northern hemisphere, between latitudes of +90 and -50 degrees. A presents as a relatively massive red bright giant, but radial velocity measurements suggest a companion with a period of the order of a decade. However, it will get more luminous as it draws closer to the Sun in about 2 million-years. B’s two components are a primary yellow giant star and a secondary, yellow-white dwarf star in a 51.578 day orbit. When this happens it will increase to an apparent magnitude of 1.75 and will be only 218 light-years away. Alpha-2 Herculis shines with an apparent visual magnitude of 5.4.