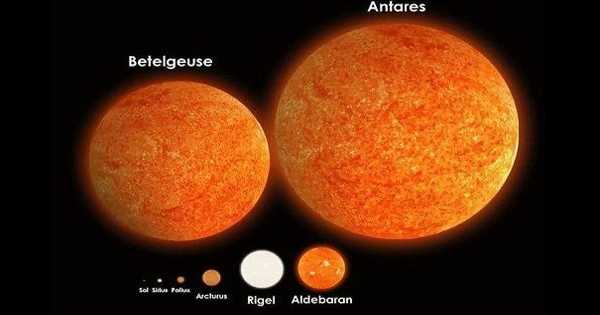 Alpha Scorpii (Scorpii,) is the sixteenth brightest star in the night sky and a red supergiant star in the Milky Way galaxy. When viewed with the naked eye, this star appears reddish. It is a slow irregular variable star with an apparent magnitude ranging from +0.6 to +1.6. Depending on how the two brighter components of the Capella quadruple star system are counted, it is listed as the 15th or 16th brightest.

The brightest and most massive star in the Scorpius-Centaurus Association is Alpha Scorpii. Thousands of stars in the Scorpius-Centaurus Association have an average age of 11 million years. Its exact size is unknown, but if placed in the center of the Solar System, it would reach somewhere between Mars and Jupiter’s orbits. Its mass is estimated to be approximately 12 times that of the Sun.

Antares B is a secondary or companion star to Alpha Scorpii. The companion star’s orbit and properties are unknown, with an estimated period of 1,200 to 2,562 years. It is the brightest, most massive, and most evolved stellar member of the nearest OB association, the Scorpius–Centaurus Association, and it is located at the rim of the Upper Scorpius part, illuminating the Rho Ophiuchi cloud complex in the foreground.

This star was one of the first red supergiants to be imaged directly. It belongs to the association’s Upper Scorpius subgroup, which contains thousands of stars with an average age of 11 million years and is located about 170 parsecs (550 light-years) from Earth.

When viewed with the naked eye, this star appears to be a single star, but it is actually a binary star with two components known as Scorpii A and Scorpii B. The red supergiant is the brighter of the two, while the fainter is a hot main sequence star of magnitude 5.5.