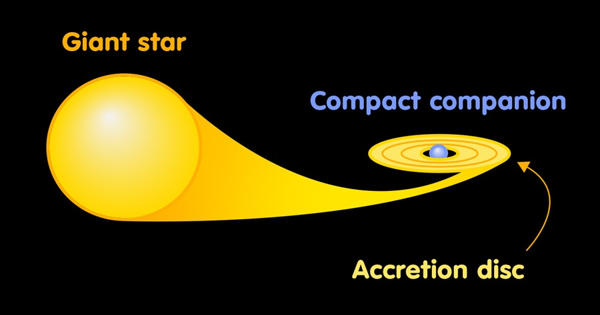 An Accretion Disk – an Astronomical Term

An accretion disk (or disc) is an astronomical term. It is a structure formed by diffuse material in orbital motion around a massive central body. It describes a disc of material being drawn in by gravity to a center of mass, such as a star or black hole. Gravitational and frictional forces compress and raise the temperature of the material, causing the emission of electromagnetic radiation. Accretion discs are flattened astronomical objects made of rapidly rotating gas that slowly spirals onto a central gravitating body. As the material comes in, it spins around the central body and radiates energy.

The central body is typically a star. The central body is typically either a young star, a protostar, a white dwarf, a neutron star, or a black hole. The black hole accretion in quasars is the most powerful and efficient stationary engine known in the universe. As the material moves in, gravitational energy released in that process is transformed into heat and rotational movement. The gravitational energy of infalling matter extracted in accretion discs powers stellar binaries, active galactic nuclei, protoplanetary discs, and some gamma-ray bursts. The gravitational energy of the gaseous matter is thereby converted to heat. A fraction of the heat is converted into radiation, which partially escapes and cools down the accretion disc.

In astrophysics, the term accretion refers to the growth in the mass of any celestial object due to its gravitational attraction. In accretion discs, the high angular momentum of the rotating matter is gradually transported outwards by stresses. The formation of stars and planets and the powerful emissions from quasars, radio galaxies, X-ray binaries, and probably also Type Ia supernovas all involve accretion disks. Accretion disc physics is thus governed by a non-linear combination of many processes, including gravity, hydrodynamics, viscosity, radiation, and magnetic fields.

The energy emitted at the disk surface is in form of electromagnetic radiation. Accretion disks around black holes are efficient radiators that can convert a sizable fraction of gas rest mass-energy into radiation. The frequency range of that radiation depends on the central object. Friction between adjoining layers causes the gas in the disk to heat up as its potential energy is slowly dissipated into heat. The gas also loses angular momentum which allows it to get closer to the central object and orbit faster. Accretion discs of young stars and protostars radiate in the infrared, those around neutron stars, and black holes in the X-ray part of the spectrum.