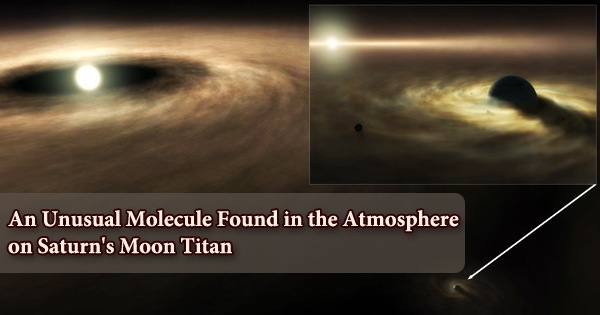 When it comes to scientists’ expectations for life beyond Earth, Titan, Saturn’s biggest moon, simply keeps becoming stranger and more fascinating. Titan is one of the most fascinating and Earth-like bodies in our solar system.  It is nearly as large as Mars and has a hazy atmosphere made mostly of nitrogen with a smattering of organic, carbon-based molecules like methane (CH4) and ethane (C2H6). This chemical make-up, according to planetary scientists, is comparable to Earth’s primordial atmosphere.

Now, two new study results add to the mystery surrounding Titan, revealing an unexpected chemical in the moon’s atmosphere as well as indications of more complex surface occurrences than previously thought. The circumstances on Titan, on the other hand, are inhospitable to life as we know it; it’s just too cold. Titan is so cold that liquid methane showers down onto its solid frozen surface, producing rivers, lakes, and seas 10 times the distance between the Earth and the sun.

These pools of hydrocarbons, on the other hand, may provide a unique environment that allows vinyl cyanide (C2H3CN) molecules to bind together to form membranes, similar to the lipid-based cell membranes seen in living things on Earth.

“We think of Titan as a real-life laboratory where we can see similar chemistry to that of ancient Earth when life was taking hold here,” Melissa Trainer, an astrobiologist at NASA’s Goddard Space Flight Center in Maryland, said in a statement. Trainer is the deputy principle investigator of NASA’s Dragonfly project, which will launch to Titan in 2027 and arrive in 2034.

Astronomers have discovered strong evidence that vinyl cyanide molecules are present on Titan in substantial numbers using archival data from the Atacama Large Millimeter/submillimeter Array (ALMA), which was gathered over a period of observations from February to May 2014.

“The presence of vinyl cyanide in an environment with liquid methane suggests the intriguing possibility of chemical processes that are analogous to those important for life on Earth,” said Maureen Palmer, a researcher at NASA’s Goddard Space Flight Center in Greenbelt, Maryland, and lead author on a paper published in Science Advances.

Previous NASA Cassini satellite investigations, as well as laboratory models of Titan’s atmosphere, hinted at the presence of vinyl cyanide on Titan, but it required ALMA to confirm it.

Palmer and her colleagues discovered three unique signal spikes in the millimeter-wavelength spectrum that correlate to vinyl cyanide after analyzing archival data. These distinctive signals were detected at a distance of at least 200 kilometers above Titan’s surface. Titan’s atmosphere is a veritable chemical factory, converting basic organic molecules into larger, more complicated compounds using the sun’s light and the energy from fast-moving particles orbiting Saturn.

Cyclopropenylidene has been discovered in other parts of our galaxy, mostly in gas and dust molecular clouds like the Taurus Molecular Cloud. In the Taurus constellation, this cloud, where stars are born, is 400 light-years away. Temperatures are too low in these clouds for many chemical reactions to take place. At any point in its history, Titan has been substantially colder than Earth. Titan’s surface water is frozen due to its typical temperature of 95 kelvins (-290 degrees Fahrenheit).

According to geologic evidence, the early Earth had significant carbon dioxide (CO2) concentrations, but Titan does not. With widespread volcanism and regular asteroid strikes, Earth’s rocky surface was likewise frenetically active, influencing the formation of our atmosphere. Titan’s ice crust, on the other hand, looks to be relatively placid.

The latest discoveries are even the more interesting because of scientists’ curiosity with Titan’s chemistry. The chemical signature of cyclopropenylidene, an odd triangular molecule comprised of three carbon atoms and two hydrogen atoms, was discovered when researchers pointed the Atacama Large Millimeter/submillimeter Array (ALMA) in Chile toward the moon.

“Titan is unique in our solar system,” Conor Nixon, a planetary scientist at Goddard, said in the same statement. “It has proved to be a treasure trove of new molecules.”

Titan’s atmosphere is thick with nitrogen and methane, giving it a fuzzy orange look. According to NASA, its air pressure is 60 percent more than Earth’s, equating to the pressure felt at the bottom of a swimming pool. Titan contains liquid bodies similar to those found on Earth, but the rivers, lakes, and seas are comprised of liquid ethane and methane, which form clouds and shower liquid gas from the sky. Titan is also thought to have an interior liquid water ocean, according to scientists.

Titan has liquid bodies similar to Earth’s, but the rivers, lakes, and seas are made up of liquid ethane and methane, which form clouds and rain liquid gas from the sky. According to experts, Titan may also contain an inner liquid water ocean. Titan is primarily covered with organic plains, which are plains and dunes of organic material that rain down on the surface, according to NASA’s Cassini mission’s mapping.

The discovery of such a fascinating chemical in Titan’s high atmosphere is especially exciting since scientists believe that sunlight-driven reactions in the region transform Titan’s basic compounds into progressively complex, heavy molecules that eventually fall down onto the moon’s surface. The National Radio Astronomy Observatory is a National Science Foundation facility that is run by Associated Universities, Inc. under a cooperative agreement.