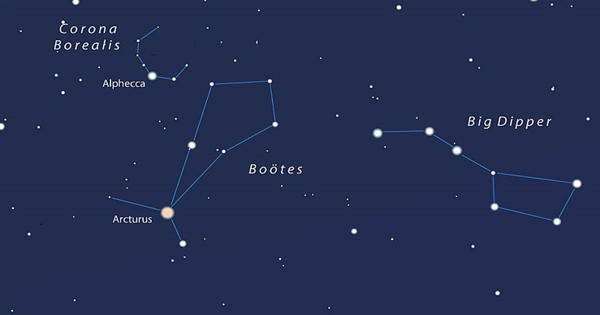 Arcturus – the brightest star in the northern celestial hemisphere

Arcturus is an orange giant star located 37 light-years away in the Boötes constellation, with its apparent magnitude of -0.05 making it the 4th brightest star in the night sky.

It’s less than 37 light-years away and appears as the brightest star north of the celestial equator. It is a relatively close star at only 36.7 light-years from Earth, and, together with Vega and Sirius, one of the most luminous stars in the Sun’s neighborhood. When viewed from Earth, it appears to be positioned almost at the north galactic pole of the Milky Way.

Arcturus is a type K1.5 IIIpe orange giant star, with an absolute magnitude of −0.30. It has likely exhausted its hydrogen from the core and is now in its active red giant phase. The reddish or orange color of Arcturus signifies its temperature, which is about 7,300 degrees Fahrenheit (around 4,000 Celsius). It will continue to expand before entering the horizontal branch stage of its life cycle. The diameter of the Arcturus is around 40 million kilometers. One notable feature of Arcturus is its high proper motion, which at a break-neck speed of 122 kilometers per second (2 seconds of arc per year), is the fastest of any first-magnitude star except Alpha Centauri.

Arcturus is roughly 25 times greater in diameter than our sun. Because of its larger size, in visible light, Arcturus radiates more than 100 times the light of our sun. Relatively close at 36.7 light-years from the Sun, Arcturus is a red giant of spectral type K0III—an aging star around 7.1 billion years old that has used up its core hydrogen and moved off the main sequence. If you consider infrared and other forms of radiant energy, Arcturus is about 200 times more powerful than the sun. Its mass is hard to exactly determine, but might be slightly greater than that of our sun. It is 1.08±0.06 times as massive as the Sun but has expanded to 25.4±0.2 times its size and is around 170 times as luminous. It will subsequently blow off its outer layers, and evolve into a white dwarf surrounded by a planetary nebula. The diameter is 35 million kilometers.