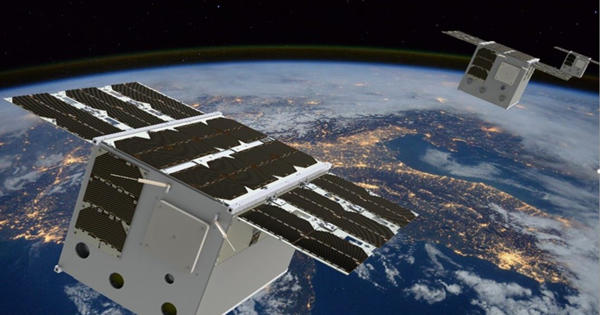 Scientists published new research findings today that suggest artificial objects in orbit around the Earth are brightening our planet’s night skies significantly more than previously thought. According to the study, which has been accepted for publication in Monthly Notices of the Royal Astronomical Society: Letters, the number of objects orbiting Earth could increase the overall brightness of the night sky by more than 10% above natural light levels across a large portion of the planet. This would exceed a threshold established by astronomers over 40 years ago for classifying a location as “light polluted.”

“Our primary motivation was to estimate the potential contribution to night sky brightness from external sources, such as space objects in Earth’s orbit,” said Miroslav Kocifaj, the study’s lead author from the Slovak Academy of Sciences and Comenius University in Slovakia. “We expected the sky brightness increase to be marginal, if at all, but our preliminary theoretical estimates have proven extremely surprising, encouraging us to report our findings as soon as possible.”

The study is the first to look at the overall impact of space objects on the night sky rather than the effect of individual satellites and space debris on astronomers’ night sky images. The team of researchers from Slovakia, Spain, and the United States used known distributions of the sizes and brightnesses of the objects as inputs to the model to model the contribution of space objects to the overall brightness of the night sky.

The research includes both operational satellites and assorted debris such as spent rocket stages. While telescopes and sensitive cameras frequently resolve space objects as discrete points of light, low-resolution light detectors such as the human eye only see the combined effect of many such objects. The result is an increase in the diffuse brightness of the night sky, which may obscure sights like the glowing clouds of stars in the Milky Way as seen away from city light pollution.

“Unlike ground-based light pollution, this type of artificial light in the night sky can be seen across a large portion of the Earth’s surface,” said John Barentine, Director of Public Policy for the International Dark-Sky Association and co-author of the study. “Astronomers construct observatories far from city lights in order to seek dark skies, but this type of light pollution has a much wider geographical reach.”

Astronomers have expressed unease in recent years about the growing number of objects orbiting the planet, particularly large fleets of communications satellites known informally as ‘mega-constellations.

In addition to crowding the night sky with more moving artificial light sources, the arrival of this technology increases the likelihood of collisions between satellites or between satellites and other objects, resulting in additional debris. Mega-constellations have been identified as a threat to the continued utility of astronomy facilities on the ground and in low-Earth orbit in recent reports sponsored by the US National Science Foundation and the United Nations Office for Outer Space Affairs. The Royal Astronomical Society in the United Kingdom has formed several working groups to investigate the impact of mega-constellations on optical and radio astronomical facilities used by scientists.

The findings published today imply that the night sky will continue to brighten in proportion to the number of new satellites launched and their optical properties in orbit. SpaceX, for example, has recently worked to reduce the brightness of their spacecraft through design changes. Despite these mitigation efforts, the cumulative effect of a sharp increase in the number of orbiting objects threatens to change the night sky experience for many people around the world.

The researchers hope that their findings will alter the nature of the ongoing debate between satellite operators and astronomers about how to best manage the Earth’s orbital space. “Our findings suggest that many more people than just astronomers may lose access to pristine night skies,” said Barentine. “This paper has the potential to significantly alter the nature of that conversation.”

Astronomers have complained that the increasing number of artificial space objects is clogging the sky and interfering with observations. To get a good view of the dark sky, they usually set up observatories far away from city lights. The scatter of lights from space objects, on the other hand, has a large geographic reach, according to the study.

The researchers hope that their findings will alter the conversation between satellite operators and astronomers about how to address issues such as growing space debris and light dispersion from artificial moving space objects.