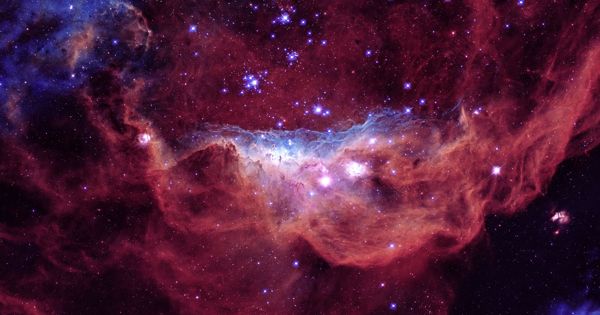 The first high-resolution image of an expanding bubble of hot plasma and ionized gas where stars are born was created by researchers at the University of Maryland. Previous low-resolution images didn’t show the bubble clearly or reveal how it expanded into the surrounding gas.

The researchers analyzed data from the Stratospheric Observatory for Infrared Astronomy (SOFIA) telescope to study one of the Milky Way galaxy’s brightest and most massive star-forming regions. Their analysis revealed that a single, expanding bubble of warm gas surrounds the Westerlund 2 star cluster, contradicting previous studies that suggested two bubbles surrounded Westerlund 2. The researchers also discovered the origin of the bubble and the energy that propels its expansion. Their findings were published in The Astrophysical Journal.

“When massive stars form, they blow off much stronger ejections of protons, electrons, and heavy metal atoms than our sun,” said Maitraiyee Tiwari, the study’s lead author and a postdoctoral associate in the UMD Department of Astronomy. “These ejections are known as stellar winds, and extreme stellar winds can blow and shape bubbles in the surrounding clouds of cold, dense gas. We observed a bubble centered on the brightest cluster of stars in this region of the galaxy, and we were able to measure its radius, mass, and rate of expansion.”

Astronomers have created a high-resolution image of an expanding bubble of hot plasma and ionized gas where stars are born.

These expanding bubbles’ surfaces are made of a dense gas of ionized carbon, which forms a kind of outer shell around the bubbles. Within these shells, new stars are thought to form. However, the bubbles enclosing these star clusters, like soup in a boiling cauldron, overlap and intermingle with clouds of surrounding gas, making it difficult to distinguish the surfaces of individual bubbles.

Tiwari and her colleagues improved their understanding of the bubble that encircles Westerlund 2 by measuring the radiation emitted by the cluster across the entire electromagnetic spectrum, from high-energy X-rays to low-energy radio waves. Previous studies used only radio and submillimeter wavelength data, resulting in low-resolution images that did not show the bubble. A far-infrared wavelength emitted by a specific carbon ion in the shell was one of the most important measurements.

“We can use spectroscopy to actually tell how fast this carbon is moving either towards or away from us,” said Ramsey Karim (M.S. ’19, astronomy), a co-author of the study and a Ph.D. student in astronomy at UMD. “This method employs the Doppler effect, which causes the pitch of a train’s horn to change as it passes you. The color in our case varies slightly depending on the velocity of the carbon ions.”

Tiwari and Karim were able to create a 3D view of the expanding stellar-wind bubble surrounding Westerlund 2 by determining whether the carbon ions were moving toward or away from Earth and combining that information with measurements from the rest of the electromagnetic spectrum.

In addition to discovering a single stellar wind-driven bubble around Westerlund 2, they discovered evidence of new stars forming in the bubble’s shell region. Their research also suggests that as the bubble expanded, it split open on one side, releasing hot plasma and slowing the shell’s expansion around a million years ago. But then, about 200,000 or 300,000 years ago, another bright star in Westerlund 2 evolved, and its energy re-energized the Westerlund 2 shell’s expansion.

“We saw that the expansion of the bubble surrounding Westerlund 2 was reaccelerated by winds from another very massive star, which restarted the process of expansion and star formation,” Tiwari explained. “This implies that stars will continue to be born in this shell for a long time, but the new stars will become less and less massive as this process continues.”

Tiwari and her colleagues will now apply their method to other bright star clusters and warm gas bubbles in order to gain a better understanding of the galaxy’s star-forming regions. The work is part of FEEDBACK, a NASA-supported multi-year program.