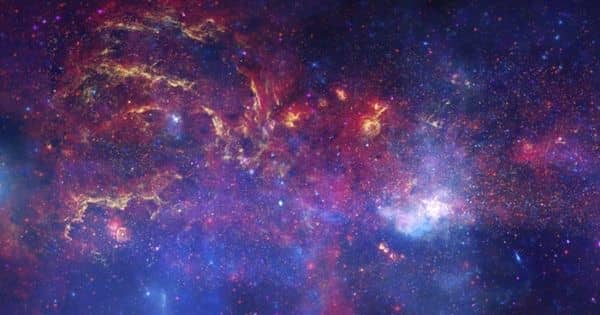 The interstellar medium (ISM) is an ever-changing, dynamic environment. It serves as the cauldron in which stars are formed. It acts as a conduit for the enriched products of stellar nucleosynthesis that are ejected from stars during their evolution. The constant flow of energy through the ISM, as well as the exchange of materials between its gas and that in stars, forms a cycle that drives the evolution of galaxies.

Astronomers have discovered a prebiotic molecule in space molecular clouds, which could help us understand how life evolved on Earth. The molecule, ethanolamine (NH2CH2CH2OH), is classified as a prebiotic compound that existed prior to the emergence of life on Earth and may have played a role in it.

In living organisms, such a molecule is part of the cell membrane, which serves as a barrier between cells. Ethanolamine has previously been discovered in meteorites, and researchers suspected that something in the meteorites must have aided in the molecule’s formation. The new study, which was published in the Proceedings of the National Academy of Sciences, alters this picture.

Astronomers have discovered a prebiotic molecule in molecular clouds in space, a finding that could be important in our understanding of how life evolved on Earth.

The team discovered G+0.693–0.027, a molecular cloud near the center of the Milky Way. This is one of the galaxy’s most chemically diverse clouds. Using a radio telescope, they discovered a surprising amount of ethanolamine emissions in the cloud.

According to the findings, the abundance of this molecule in interstellar space is comparable to that found in meteorites. This led the team to conclude that it formed between the stars and was then later incorporated into space rocks as the Solar System formed.

These rocks eventually fell to Earth, carrying the ethanolamine with them. According to the results of the team’s experiments, this molecule could have eventually produced phospholipids, which are the larger molecules that makeup cell membranes.

“The early Earth’s availability of ethanolamine, along with fatty acids or alcohols, may have contributed to the assembly and early evolution of primitive cell membranes.” This has significant implications not only for the study of the origins of life on Earth but also for the study of other habitable planets and satellites anywhere in the Universe,” co-author Carlos Briones said.

In Spain, the observations were made with the IRAM 30-meter and Yebes 40-meter radio telescopes. However, there are larger and more sophisticated instruments available to search for such molecules, so the researchers believe that we will soon have a better understanding of where some critical components of life come from.

“Thanks to the improved sensitivity of today’s and tomorrow’s radio telescopes, we will be able to detect interstellar molecules of increasing complexity that are direct precursors of the three basic components of life: lipids that form membranes, RNA and DNA nucleotides that contain genetic information, and proteins that are responsible for metabolic activity,” say the researchers.

“Are these prebiotic seeds found throughout the Galaxy, and even in other galaxies?” We’ll find out fairly soon.”

In their concluding remarks, the researchers emphasize the importance of further observations of other molecules in order to determine whether another process is also involved in the formation of complex organic molecules in the center of the Milky Way. “Future methyl formate observations are expected to investigate whether energetic processes also play a role in the production of complex organic molecules in the Galactic center,” the astronomers concluded.