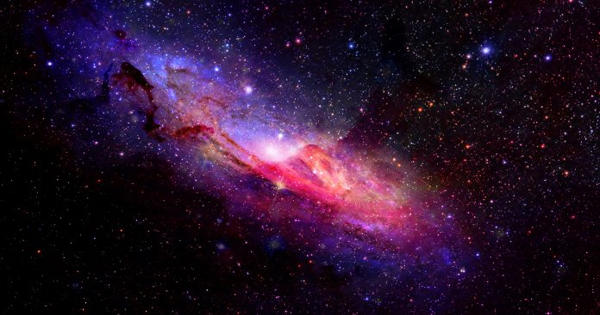 Astronomers discovered a rotating baby galaxy 1/100th the size of the Milky Way using the Atacama Large Millimeter/submillimeter Array (ALMA) at a time when the universe was only 7 percent of its current age. The team was able to investigate the nature of small and dark “normal galaxies” in the early universe for the first time, representing the main population of the first galaxies, which greatly advances our understanding of the initial phase of galaxy evolution.

“Many of the galaxies that existed in the early universe were so small that their brightness is well below the limit of the current largest telescopes on Earth and in Space,” says Nicolas Laporte, a Kavli Senior Fellow at the University of Cambridge. “However, gravitational lensing magnified the light from the galaxy named RXCJ0600-z6, making it an ideal target for studying the properties and structure of typical baby galaxies.”

Astronomers found a rotating baby galaxy 1/100th the size of the Milky Way at a time when the universe was only 7 percent of its present age.

The ALMA Lensing Cluster Survey (ALCS) team used ALMA to look for a large number of galaxies enlarged by gravitational lensing in the early universe. Researchers are able to discover and study fainter galaxies by combining the power of ALMA with the assistance of natural telescopes.

The ALCS team carried out a large-scale observation program that lasted 95 hours, which is unusual for ALMA observations, to observe the central regions of 33 galaxy clusters that could cause gravitational lensing. RXCJ0600-2007, one of these clusters, is located in the direction of the constellation Lepus and has a mass 1000 trillion times that of the Sun. The researchers discovered a single distant galaxy that is being influenced by the gravitational lens created by this natural telescope.

ALMA detected light from carbon ions and stardust in the galaxy, which, when combined with data from the Gemini telescope, determined that the galaxy is seen as it was about 900 million years after the Big Bang (12.9 billion years ago). According to further analysis of these data, a portion of this source is seen to be 160 times brighter than it is intrinsically.

It is possible to “undo” the gravitational lensing effect and restore the magnified object’s original appearance by precisely measuring the mass distribution of the cluster of galaxies. The team was able to reconstruct the actual shape of the distant galaxy RXCJ0600-z6 by combining data from the Hubble Space Telescope and the European Southern Observatory’s Very Large Telescope with a theoretical model. This galaxy’s total mass is about 2 to 3 billion times that of the Sun, or about 1/100th the size of our own Milky Way Galaxy.

The team was taken aback by the fact that RXCJ0600-z6 is rotating. Traditionally, gas in young galaxies was thought to move randomly and chaotically. ALMA has only recently discovered several rotating young galaxies that have thrown the traditional theoretical framework for a loop, but these were several orders of magnitude brighter (larger) than RXCJ0600-z6.

“Our study demonstrates for the first time that we can directly measure the internal motion of such faint (less massive) galaxies in the early Universe and compare it to theoretical predictions,” says Kotaro Kohno, a University of Tokyo professor and the ALCS team’s leader.

“The fact that the RXCJ0600-z6 has a very high magnification factor raises expectations for future research,” says Seiji Fujimoto, a DAWN fellow at the Niels Bohr Institute. “Among hundreds of candidates, this galaxy has been chosen to be observed by the James Webb Space Telescope (JWST), the next-generation space telescope set to launch this autumn.” We will learn about the properties of gas and stars in a baby galaxy, as well as its internal motions, using ALMA and JWST observations. When the Thirty Meter Telescope and the Extremely Large Telescope are finished, they may be able to detect star clusters in the galaxy and even resolve individual stars.

There is an example of gravitational lensing that has been used to observe a single star 9.5 billion light-years away, and this research has the potential to extend this to less than a billion years after the birth of the Universe.”