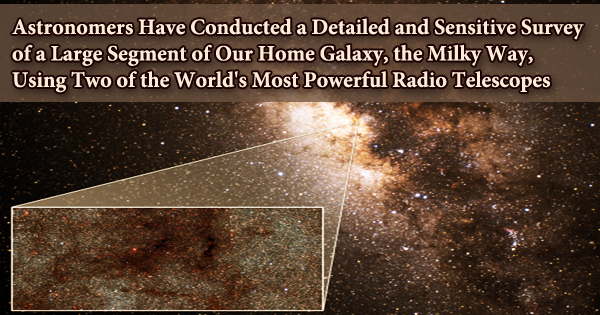 Astronomers Have Conducted a Detailed and Sensitive Survey of a Large Segment of Our Home Galaxy, the Milky Way, Using Two of the World’s Most Powerful Radio Telescopes

Astronomers have conducted a thorough and sensitive study of a huge part of our home galaxy, the Milky Way, using two of the world’s most powerful radio telescopes, discovering hitherto unknown tracers of massive star formation, a process that dominates galactic ecosystems. The scientists used the Karl G. Jansky Very Large Array (VLA) of the National Science Foundation and the 100-meter Effelsberg Telescope in Germany to create high-quality data that will be useful to scholars for years to come.

What looks to the unassisted eye as a cloud dissolves into countless millions of stars, which are too far apart and too close together for us to pick out individually with our eyes. A rain-cloud, for example, seems solid in the sky but is made up of innumerable water droplets. The Milky Way’s stars converge to form a single ribbon of light. With a telescope, though, we can see the Milky Way for what it is: a spiral arm of our galaxy.

The Milky Way does not remain still; it rotates continually. As a result, the arms move through space. They are accompanied by the sun and the solar system. The average speed of the solar system is 515,000 mph (828,000 km/h). Even at this breakneck speed, it would take the solar system 230 million years to cross the length of the Milky Way. Stars with masses greater than 10 times that of our Sun are major members of the Galaxy and have a significant impact on their surroundings. However, astronomers have had difficulty understanding how these big stars originate.

This difficulty has recently been addressed by examining the Milky Way at many wavelengths, including radio and infrared. This new study, dubbed GLOSTAR (Global view of Star Formation in the Milky Way), was created to take use of the VLA’s greatly enhanced capabilities as a result of a 2012 upgrade effort, allowing it to produce previously unobtainable data.

GLOSTAR has enthralled scientists by providing fresh information on the birth and death of huge stars, as well as the thin material that exists between them. The GLOSTAR team has released a series of articles in the journal Astronomy & Astrophysics detailing the preliminary results of their study, including comprehensive analyses of many specific objects. The investigation is still ongoing, and further findings will be released later.

The survey discovered early-stage tracers of massive star formation, such as compact regions of hydrogen gas ionized by powerful radiation from young stars and radio emission from methanol (wood alcohol) molecules, which can pinpoint the location of very young stars still shrouded in clouds of gas and dust in which they are forming.

Many new relics of supernova explosions, the spectacular deaths of big stars, were discovered during the search. In previous investigations, less than a third of the predicted number of supernova remnants in the Milky Way had been discovered. GLOSTAR more than quadrupled the number discovered using VLA data alone in the region it analyzed, with more likely to show in the Effelsberg data.

“This is an important step to solve this longstanding mystery of the missing supernova remnants,” said Rohit Dokara, a Ph.D student at the Max Planck Institute for Radioastronomy (MPIfR) and lead author on a paper about the remnants.

To provide a full picture of the region they investigated, the GLOSTAR team integrated data from the VLA with the Effelsberg telescope. The multi-antenna VLA interferometer combines signals from widely dispersed antennas to produce pictures with extremely high resolution and a fine level of detail. Large-scale structures, on the other hand, are frequently missed by such a system. The Effelsberg telescope, with a diameter of 100 meters, supplied data on structures bigger than those detected by the VLA, completing the picture.

“This clearly demonstrates that the Effelberg telescope is still very crucial, even after 50 years of operation,” said Andreas Brunthaler of MPIfR, project leader and first author of the survey’s overview paper.

Dust absorbs visible light well, yet radio waves get through it easily. Radio telescopes are critical for exposing the dusty areas where newborn stars originate.

The results from GLOSTAR, combined with other radio and infrared surveys, “offers astronomers a nearly complete census of massive star-forming clusters at various stages of formation, and this will have lasting value for future studies,” said team member William Cotton, of the National Radio Astronomy Observatory (NRAO), who is an expert in combining interferometer and single-telescope data.

“GLOSTAR is the first map of the Galactic Plane at radio wavelengths that detects many of the important star formation tracers at high spatial resolution. The detection of atomic and molecular spectral lines is critical to determine the location of star formation and to better understand the structure of the Galaxy,” said Dana Falser, also of NRAO.

The initiator of GLOSTAR, the MPIfR’s Karl Menten, added, “It’s great to see the beautiful science resulting from two of our favorite radio telescopes joining forces.”

The National Radio Astronomy Observatory is a National Science Foundation facility that is run by Associated Universities, Inc. under a cooperative agreement.