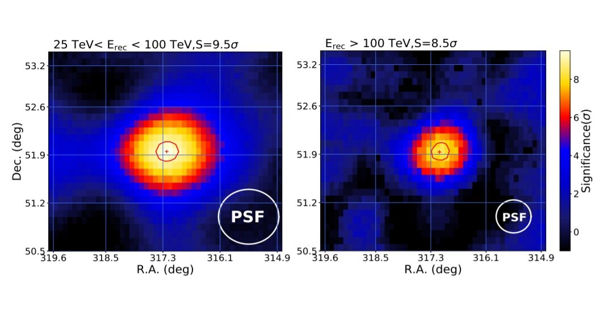 Ultra-high-energy gamma rays have photon energies greater than 100 TeV. (0.1 PeV). They have a higher frequency than 2.42 × 1028 Hz and a shorter wavelength than 1.24 × 10-20 m. In 2019, the existence of these rays was confirmed. Ultra-high-energy gamma rays are significant because they may reveal the origin of cosmic rays. They travel in a straight line from their source to an observer, ignoring the relatively weak effect of gravity. Unlike cosmic rays, the direction of travel of cosmic rays is scrambled by magnetic fields.

Very-high energy (VHE) gamma-ray sources emit gamma radiation with photon energies ranging from 100 GeV to 100 TeV, while ultra-high energy (UHE) gamma-ray sources emit photon energies greater than 0.1 PeV. Because the nature of these sources is still unknown, astronomers are constantly on the lookout for new objects of this type in order to characterize them and shed more light on their properties in general.

“Section 2 of this paper describes the discovery of a new UHE gamma-ray source, LHAASO J2108+5157, based on the LHAASO-KM2A observation. It is the first source discovered in the UHE band that does not have a VHE counterpart reported by other detectors “The researchers wrote about it.

LHAASO J2108+5157 is a point-like source with an extension of fewer than 0.39 degrees, according to the research. However, due to the limited statistics and uncertainty, the astronomers noted that a slightly extended morphology cannot be ruled out. LHAASO J2108+power-law 5157’s spectral index was found to be 2.83.

The search for the acceleration site up to or even beyond Ultra-high energy is a critical problem in understanding the origin of cosmic rays (UHE). PeVatrons are the name given to such extreme accelerators. However, because cosmic rays are composed of subatomic particles such as protons or atomic nuclei, they are charged and lose direction information while propagating in the magnetic field of the interstellar medium, making it impossible to identify PeVatrons through direct cosmic ray measurement. UHE-rays, which fall in the peta-electronvolt (1015 eV) range, on the other hand, are unavoidably produced inside or near PeVatrons. γ-rays are not charged and travel straight, thus they can be regarded as the straightforward signature to identify PeVatrons.

The authors of the paper offer few explanations for the detected UHE gamma-ray emission from LHAASO J2108+5157. They discovered that UHE emission could be caused by protons accelerated to PeV colliding with the surrounding dense gas. They believe that the hadronic origin is most likely due to the coincidence of LHAASO J2108+5157 and the molecular cloud [MML2017]4607.

“The observed gamma-rays are attributed to the decay of 0 mesons produced in the [MML2017]4607 inelastic collisions between accelerated protons and target gas. We assume an exponential cut-off power-law form for the energy distribution of the parent particles “The astronomers elaborated.