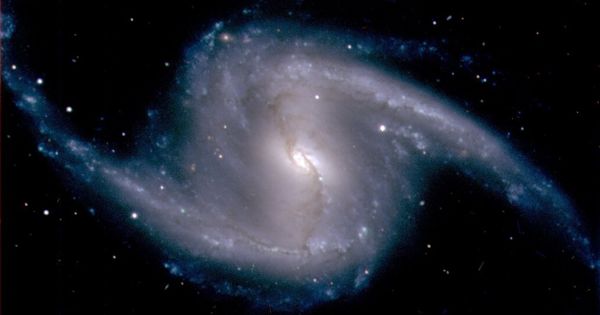 Astronomers Measure the Expansion Rate of the Local Universe

Surface brightness fluctuations are potentially one of the most precise methods astronomers have discovered for measuring the rate of expansion of the local universe, the Hubble constant. Scientists have now published the first good SBF estimate of the Hubble constant, putting it at 73.3 km/s/Mpc, which is in line with other measurements of the local expansion, including the gold standard using Type Ia supernovae. The new estimate emphasizes the discrepancy with early universe estimates.

Understanding our cosmic fate requires knowing how fast the universe is expanding, but with more precise data comes a conundrum: Estimates based on measurements within our local universe disagree with extrapolations from the 13.8 billion-year-old Big Bang.

A new estimate of the Hubble constant, or H0 (H-naught), confirms this discrepancy.

Using a relatively new and potentially more precise technique for measuring cosmic distances, astronomers calculate a rate – 73.3 kilometers per second per megaparsec, give or take 2.5 km/sec/Mpc – that falls in the middle of three other good estimates, including the gold standard estimate. This means that the universe is expanding at a rate of 73.32.5 kilometers per second for every megaparsec – 3.3 million light years, or 3 billion trillion kilometers – from Earth. The combined average of the other three techniques is 73.51.4 km/sec/Mpc.

Perplexingly, estimates of the local expansion rate based on measured fluctuations in the cosmic microwave background and, independently, fluctuations in the density of normal matter in the early universe (baryon acoustic oscillations), give a very different answer: 67.4 ±0.5 km/sec/Mpc.

Astronomers determined the distance by measuring fluctuations in the surface brightness of 63 giant elliptical galaxies and plotting distance against velocity for each to obtain H0. Within about 100 Mpc of Earth, or 330 million light years, the surface brightness fluctuation (SBF) technique is independent of other techniques and has the potential to provide more precise distance estimates than other methods. The 63 galaxies in the sample are located at distances ranging from 15 to 99 Mpc and date back only a fraction of the universe’s age.

“This is a fantastic method for measuring distances to galaxies out to 100 megaparsecs,” said cosmologist Chung-Pei Ma, the Judy Chandler Webb Professor in the Physical Sciences at the University of California, Berkeley, and professor of astronomy and physics. “This is the first paper to assemble a large, homogeneous set of data on 63 galaxies in order to study H-naught using the SBF method.”

Ma is the leader of the MASSIVE survey of local galaxies, which provided data for 43 of the galaxies used in the new analysis, accounting for two-thirds of those used.

“The whole story of astronomy is, in a sense, the effort to understand the absolute scale of the universe, which then tells us about the physics,” Blakeslee explained, referring to James Cook’s voyage to Tahiti in 1769 to measure a transit of Venus so scientists could calculate the true size of the solar system. “The SBF method is more broadly applicable to the general population of evolved galaxies in the local universe, and certainly, if we collect enough galaxies with the James Webb Space Telescope, this method has the potential to provide the best local measurement of the Hubble constant.”

Since Edwin Hubble first measured the local expansion rate and came up with an answer seven times too large, implying that the universe was actually younger than its oldest stars, the Hubble constant has been a source of contention for decades. The problem, then and now, is determining the location of objects in space that provide few hints as to how far away they are.

Over time, astronomers have worked their way up to greater distances, beginning with calculating the distance to objects close enough that they appear to move slightly due to parallax as the Earth orbits the sun.

Variable stars known as Cepheids take you further because their brightness varies with their period of variability, and Type Ia supernovae take you even further because they are extremely powerful explosions that, at their peak, shine as brightly as an entire galaxy. The absolute brightness of Cepheids and Type Ia supernovae can be calculated from the way they change over time, and the distance can be calculated from their apparent brightness as seen from Earth.

The best current estimate of H0 comes from distances determined by Type Ia supernova explosions in distant galaxies, though newer methods – time delays caused by gravitational lensing of distant quasars and the brightness of water masers orbiting black holes – all give roughly the same value.

One of the most recent techniques relies on the fact that giant elliptical galaxies are old and have a consistent population of old stars – mostly red giant stars – that can be modeled to give an average infrared brightness across their surface. The researchers took high-resolution infrared images of each galaxy with the Hubble Space Telescope’s Wide Field Camera 3 and calculated how much each pixel in the image differed from the “average” — the smoother the fluctuations over the entire image, the farther the galaxy, once blemishes like bright star-forming regions are removed from the analysis.

Neither Blakeslee nor Ma were surprised that the expansion rate matched the other local measurements. However, they are equally perplexed by the obvious discrepancy with estimates from the early universe – a discrepancy that many astronomers believe indicates that our current cosmological theories are incorrect, or at the very least incomplete.

“I think it brings that stake in a little bit closer,” Blakeslee said. “But it (?CDM) is still alive and well. Some people believe that the observers are wrong about all of these local measurements. But making that claim is becoming increasingly difficult because it would necessitate systematic errors in the same direction for several different methods: supernovae, SBF, gravitational lensing, and water masers. As more independent measurements become available, the stakes become a little higher.”

Ma wonders if the uncertainties that astronomers ascribe to their measurements, which reflect both systematic and statistical errors, are overly optimistic, and if the two ranges of estimates can still be reconciled.

“The verdict is in,” she declared. “I believe it is in the error bars. However, assuming that everyone’s error bars are not overestimated, the tension is becoming unbearable.”

In fact, one of the field’s giants, astronomer Wendy Freedman, recently published a study that pegged the Hubble constant at 69.81.9 km/sec/Mpc, further roiling the waters. The most recent result from Adam Riess, an astronomer who shared the Nobel Prize in Physics in 2011 for discovering dark energy, is 73.21.3 km/sec/Mpc. When Riess conducted this research, he was a Miller Postdoctoral Fellow at UC Berkeley, and he shared the prize with UC Berkeley and Berkeley Lab physicist Saul Perlmutter.

The new value of H0 is a result of two other surveys of nearby galaxies, specifically Ma’s MASSIVE survey, which uses space and ground-based telescopes to study the 100 most massive galaxies within about 100 million light-years of Earth. One major goal is to weigh the supermassive black holes at their centers.

To do so, precise distances are required, and the SBF method is currently the best, according to her. Last year, the MASSIVE survey team used this method to calculate the distance to NGC 1453, a giant elliptical galaxy in the constellation Eridanus in the southern sky. They concluded that NGC 1453 has a central black hole with a mass nearly 3 billion times that of the sun by combining that distance, 166 million light years, with extensive spectroscopic data from the Gemini and McDonald telescopes, which allowed Ma’s graduate students Chris Liepold and Matthew Quenneville to measure the velocities of the stars near the center of the galaxy.

Blakeslee calculated H0 by calculating SBF distances to 43 galaxies in the MASSIVE survey, based on 45 to 90 minutes of HST observing time for each galaxy. The other 20 came from another survey that used HST to image large galaxies, specifically those with Type Ia supernovae.

The majority of the 63 galaxies are between 8 and 12 billion years old, implying that they have a large population of old red stars, which are essential to the SBF method and can also be used to improve distance calculations.

“The goal is to make this SBF method completely independent of the Cepheid-calibrated Type Ia supernova method by obtaining a red giant branch calibration for SBFs using the James Webb Space Telescope,” he explained.

“The James Webb Space Telescope has the potential to significantly reduce the error bars for SBF,” Ma added. But, for the time being, the two discordant Hubble constant measurements will have to learn to coexist. “I didn’t set out to measure H0; it was a fantastic result of our survey,” she explained. “However, as a cosmologist, I’m keeping a close eye on this.”