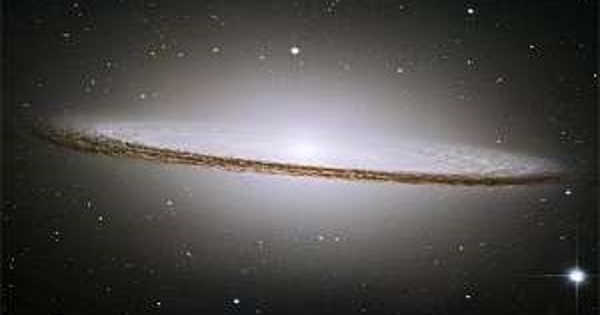 Large spiral galaxies, such as the Milky Way, grew by absorbing smaller galaxies, a process known as galactic cannibalism, according to the most recent cosmological models. The tidal stellar streams that are observed around them, which are the remnants of these satellite galaxies, provide evidence for this. However, the full histories of the majority of these cases are difficult to study because these star flows are very faint, and only the remnants of the most recent mergers have been detected.

A study led by the Instituto de Astrofsica de Andalucia (IAA-CSIC) and involving the Instituto de Astrofsica de Canarias (IAC) made detailed observations of a large tidal flow around the Sombrero galaxy, whose strange morphology has yet to be definitively explained. The findings were published in the journal Monthly Notices of the Royal Astronomical Society today (MNRAS).

The Sombrero galaxy (Messier 104) is a thirty million light-year-apart galaxy that is part of the Local Supercluster (a group of galaxies that includes the Virgo cluster and the Local Group containing the Milky Way). It is roughly one-third the size of the Milky Way and exhibits characteristics of both of the Universe’s dominant types of galaxies, spirals, and ellipticals. It has spiral arms and a large bright central bulge, giving it the appearance of a hybrid of the two types.

Astronomers have made detailed observations of a large tidal flow around the Sombrero galaxy, whose strange morphology has still not been definitively explained.

“Our goal in obtaining these extremely detailed images of the Sombrero galaxy (Messier 104) was to look for remnants of its merger with a much larger galaxy. This possible collision was recently proposed based on Hubble Space Telescope studies of the stellar population of its strange halo “says David Martnez-Delgado, an IAA-CSIC researcher and first author of the paper describing the work.

Hubble observations in 2020 revealed that the halo, a large and faint region surrounding the Sombrero galaxy, contains many stars rich in metals, elements heavier than hydrogen and helium. This is a characteristic of new generations of stars, which are typically found in galaxies’ discs, and is quite unusual in galactic halos, which are populated by old stars. To explain their presence, astronomers proposed a scenario known as “a wet merger,” in which a large elliptical galaxy is rejuvenated by large amounts of gas and dust from another massive galaxy, resulting in the formation of the disc we now see.

“We haven’t found any evidence to support this hypothesis in our images, but we can’t rule out the possibility that it happened several thousand million years ago, and the debris has since dissipated – explains David Martnez-Delgado. In our search, we were able to trace the entire tidal stream that surrounds the disc of this galaxy for the first time, and our theoretical simulations allowed us to reconstruct its formation in the last three thousand million years, through cannibalism of a satellite dwarf galaxy.”

“In today’s Astrophysics, advanced image processing is required for observational techniques. Our modeling of the bright stars surrounding the Sombrero galaxy, as well as the galaxy’s halo light, has allowed us to reveal the nature of this tidal stream. It is remarkable that we have been able to conduct front-line science with a Messier object using only an 18 cm (diameter) telescope thanks to these advanced photometric techniques “explains Javier Román, a postdoctoral researcher at the IAC and study co-author.

The research team rejects the idea that the large stellar tidal stream, which has been known for more than three decades, is related to the event that caused the strange morphology of the Sombrero galaxy, which, if caused by a wet merger, would require the interaction of two galaxies with large masses.

The work was made possible by the collaboration of professional and amateur astronomers. “We worked with the Spanish astrophotographer Manuel Jiménez, who captured the images with an 18-centimeter-diameter robotic telescope, and the well-known Australian astrophotographer David Malin, who discovered the tidal stream on photographic plates taken in the 1990s. This collaboration demonstrates the ability of amateur telescopes to take deep images of nearby galaxies, which provide important clues about the process of their assembly, which is still ongoing at the present time “Martnez-Delgado concludes.