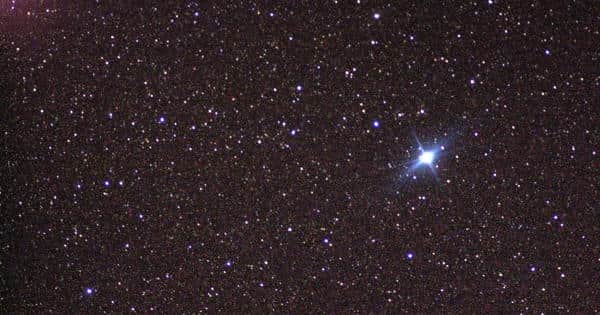 Canopus – the Brightest Star in the Southern Night Sky

Canopus located in the constellation Carina is a yellowish-white supergiant 313 light-years away, which is 65 times the size of our own sun. It is also known as, Alpha Carinae, in the Bayer designation system, is the brightest star in its constellation (Carina) and the brightest star in the southern night sky. It has a surface temperature of around 13,600 °F, compared to 10,000°F for the Sun, and shines more than 15,000 times brighter.

Canopus is quite unusual because its distance from Earth was not known until the 1990s. Before the launching of the Hipparcos satellite telescope, distance estimates for the star varied widely, from 96 light-years to 1200 light-years. Hipparcos established Canopus as lying 310 light-years (96 parsecs) from our solar system. To see Canopus, you must either be in the Southern Hemisphere or in the southern latitudes of the Northern Hemisphere looking south during winter.

The difficulty in measuring Canopus’ distance stemmed from its being a “less luminous supergiant”. It is too far away for Earth-based parallax observations to be made, so the star’s distance was not known with certainty until the early 1990s. Lying in the southern constellation Carina, 310 light-years from Earth, Canopus is sometimes used as a guide in the attitude control of spacecraft because of its angular distance from the Sun and the contrast of its brightness among nearby celestial objects.

Canopus is 13,600 times more luminous than the Sun and the most intrinsically bright star within about 700 light-years. It is the brightest star in the constellation Carina and the second brightest star in the sky. In fact, from 1 astronomical unit, Canopus would have an apparent magnitude of -37. Canopus appears less bright than Sirius in our sky only because Sirius is much closer to the Earth (8.6 light-years). It is a supergiant, visible only to observers in the southern hemisphere and the southern part of the northern hemisphere.

The surface temperature of Canopus is 7350 ± 30 K. Its diameter has been measured at 0.6 astronomical units (the measured angular diameter being 0.006 arcseconds), 65 times that of the Sun. It is a southern constellation that lies 36 degrees below Sirius in Canis Major, and so cannot be seen north of +37 degrees latitude. If it were placed at the center of the solar system, it would extend three-quarters of the way to Mercury. An Earth-like planet would have to lie three times the distance of Pluto for its star to appear the same size in the sky as our own sun.