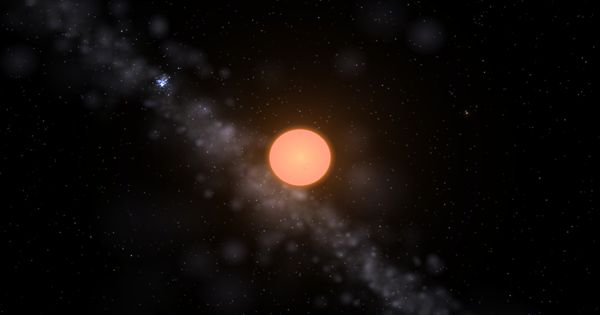 Chi Cygni is a S-Type Star type star. It is a Mira variable star located in the Cygnus constellation. It is around 500 light-years away. The constellation stands high overhead at nightfall. The annual parallax of the has been calculated at 5.53 mas in the new reduction of Hipparcos satellite data, which corresponds to a distance of 590 light-years. The parallax is only about a quarter of the angular diameter of the star. The statistical margin of error is about 20%. Chi Cygni also shows significant hotspots near the minimum radius.

Chi Cygni is in the final stages of life. It is much larger and cooler than the sun, so large that it is thousands of times more luminous despite the low temperature. It is 737 times larger than the Sun. It’s burned through the hydrogen in its core to make helium. It pulsates, with both the radius and temperature varying over approximately 409 days. It is an asymptotic giant branch star, a very cool and luminous red giant nearing the end of its life. Now, it’s burning hydrogen and helium in shells around the core. The temperature varies from about 2,400 K to about 2,700 K and the radius varies from about 350 R☉ to 480 R☉.

At its biggest, the star is almost 350 million miles wider than at its smallest. It was discovered to be a variable star in 1686 and its apparent visual magnitude varies from as bright as 3.3 to as faint as 14.2. And at visible wavelengths, it can get more than ten thousand times brighter. It is a luminous and variable red giant on the asymptotic giant branch (AGB). As it contracts and gets hotter, though, it produces mainly visible light. This means it has exhausted its core helium but is not massive enough to start burning heavier elements and is currently fusing hydrogen and helium in concentric shells. So at its peak, the star is just visible to the unaided eye.

The astronomer Gottfried Kirch discovered the variability of Chi Cygni in 1686. While researching that area of the sky for observations of Nova Vulpeculae, he noted that the star marked as χ in Bayer’s Uranometria atlas was missing. He continued to monitor the area and on October 19, 1686, he recorded it at 5th magnitude.

Chi Cygni shows one of the largest variations in the apparent magnitude of any pulsating variable star. Chi Cygni’s overall brightness doesn’t vary nearly as much, though. The observed extremes are 3.3 and 14.2 respectively, a variation of more than 10,000-fold in brightness. At its biggest, the star emits mostly infrared energy, which isn’t visible to the human eye. The mean maximum brightness is about magnitude 4.8, and the mean minimum is around magnitude 13.4.