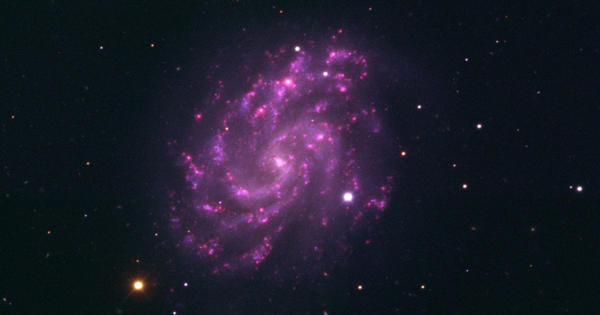 Dark matter is the name given by scientists to particles that we believe exist in the universe but cannot see! Dark matter was initially referred to as “missing matter” because astronomers were unable to detect it by observing the universe in any part of the electromagnetic spectrum. Although this material appears to have mass (and thus generates gravity), it does not appear to absorb or emit electromagnetic radiation.

Given that it does not send us any light (which is how we have learned most of what we know about the universe), it is not surprising that learning anything about the nature of these mysterious particles has been difficult. But don’t worry, scientists are devising ingenious new ways to explore the cosmos’s dark corners!

The latest scientific results from the extended Baryon Oscillation Spectroscopic Survey (eBOSS) collaboration have been released. These findings include two studies on dark energy led by Prof. Zhao Gongbo and Prof. Wang Yuting from the Chinese Academy of Sciences’ National Astronomical Observatories, respectively (NAOC). The study led by Prof. Zhao was recently published in Monthly Notices of the Royal Astronomical Society.

Scientists study dark matter by looking at the effects it has on visible objects. Scientists believe that dark matter may account for the unexplained motions of stars within galaxies. Computers play an important role in the search for dark matter information. They allow scientists to create models which predict galaxy behavior.

Prof. Zhao’s team measured the history of cosmic expansion and structure growth in a massive volume of the past universe using eBOSS observations, corresponding to a distance range of 0.7 to 1.8 billion light-years away from us. This volume had never been investigated before.

This study used a technique known as “multi-tracer analysis,” which helped to mitigate the observational systematics proposed and implemented by Prof. Zhao and Prof. Wang.

“This work detected the existence of dark energy with a significance of 11 sigma, which is the strongest evidence on dark energy ever found in galaxy surveys,” Prof. Zhao said. “The eBOSS observations are consistent with the dynamical dark energy probed by our team four years ago using the BOSS survey.”

Dark matter has yet to be directly observed by scientists. It has no interactions with baryonic matter and is completely invisible to light and other forms of electromagnetic radiation, making dark matter impossible to detect using current instruments. However, scientists are confident that it exists due to the gravitational effects it appears to have on galaxies and galaxy clusters.

Data analysis, particularly developing new methods to improve statistical accuracy and mitigate systematics, is one of the most difficult challenges of the cosmological implications of galaxy surveys. As the first galaxy survey to observe multiple types of galaxies in a large cosmic volume, eBOSS enables multi-tracer analysis.

Because dark energy dominates the current universe, revealing its nature is critical. The eBOSS collaboration, which includes NAOC and over 30 top astronomy research institutes from around the world, was formed to address the issue of dark energy. Since its inception in 2014, eBOSS has collected over 1 million spectra in the redshift range of 0.6.

eBOSS has completed its mission, but it serves as a starting point for the next chapter. The eBOSS experience is useful for cosmology projects involving larger galaxy surveys, such as the Chinese Space Station Telescope (CSST), Dark Energy Spectroscopic Instrument (DESI), and Prime Focus Spectrograph (PFS) (PFS).

Recently, astronomers used NASA’s Chandra X-ray Observatory to make the most precise measurement of the distribution of dark matter in a massive cluster of galaxies. Abell 2029, a cluster of galaxies located about a billion light-years from Earth, was observed by Chandra. The cluster is made up of thousands of galaxies encased in a massive cloud of hot gas and dark matter equivalent to more than a hundred trillion Suns! The hot gas in the cluster is held in place primarily by the gravity of the dark matter, so its distribution is determined by that of the dark matter.