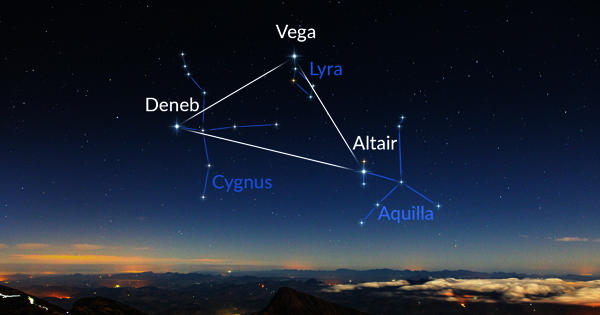 Deneb – a Brightest Star in the Constellation of Cygnus

Deneb is the most distant bright star in Earth’s sky, lying thousands of light-years away from Earth. It is also one of the three stars considered part of the “Summer Triangle,” which also includes Altair and Vega.

It has an apparent magnitude of 1.25, which means that it is the 20th brightest star in the night sky. In a dark sky, you can imagine Cygnus as a Swan, flying along the starlit trail of the summer Milky Way. However its distance from the sun and luminosity are difficult to calculate, but its distance is estimated to be approximately 2,600 light-years away. Regardless of the precise luminosity, there is no doubt that this is a star with tremendous energy output. It is thought to be between 55,000 and 196,000 times as luminous as the Sun. If Deneb could swap places with Vega, it would outshine Venus in our sky and cast shadows on Earth.

Deneb is a blue supergiant that is 203 times larger than the Sun. The 19th brightest star in the night sky, Deneb culminates each year on October 23 at 6 PM and September 7 at 9 PM, corresponding to summer evenings in the northern hemisphere. It is circumpolar as seen from locations of about 45 degrees north latitude, roughly the northern tier of U.S. states. It never dips below the horizon at or above 45° north latitude, just grazing the northern horizon at its lowest point at such locations as Minneapolis, Montréal, and Turin.

Deneb will be the Pole Star in the year 9800 AD. It is located at the tip of the Northern Cross asterism made up of the brightest stars in Cygnus, the others being Albireo (Beta Cygni), Gamma Cygni, Delta Cygni, and Epsilon Cygni. The Summer Triangle consists of 3 bright stars – Vega, Deneb, and Altair – in 3 different constellations. Deneb represents the tail of Cygnus the Swan and the head of an asterism known as the Northern Cross.