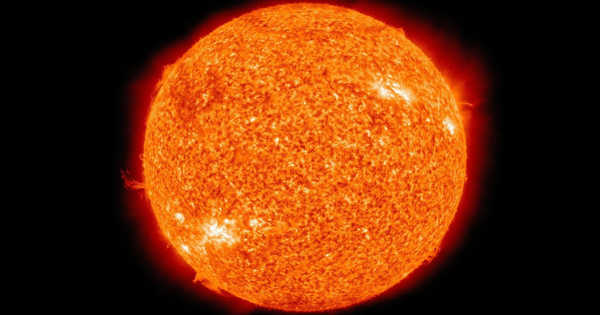 Discovery of Long-period Oscillations in the Sun

A group of solar physicists reported the discovery of global Sun oscillations with very long periods, comparable to the 27-day solar rotation period. At the solar surface, the oscillations appear as swirling motions with speeds of up to 5 kilometers per hour.

These motions were determined by analyzing ten years of data from NASA’s Solar Dynamics Observatory (SDO). The scientists demonstrated, using computer models, that the newly discovered oscillations are resonant modes that exist due to the Sun’s differential rotation. The oscillations will aid in the development of new methods for probing the Sun’s interior and learning about our star’s inner structure and dynamics. The researchers describe their findings in today’s issue of Astronomy & Astrophysics.

The Sun’s high musical notes were discovered in the 1960s: “The Sun rings like a bell.” Convective turbulence near the solar surface excites millions of modes of acoustic oscillations with short periods of less than 5 minutes, which are trapped in the solar interior. Since the mid-1990s, ground-based telescopes and space observatories have been continuously observing these 5-minute oscillations, which have been used very successfully by helioseismologists to learn about the internal structure and dynamics of our star, just as seismologists learn about the interior of the Earth by studying earthquakes. One of the triumphs of helioseismology is to have mapped the Sun’s rotation as a function of depth and latitude (the solar differential rotation).

A team of solar physicists has reported the discovery of global oscillations of the Sun with very long periods, comparable to the 27-day solar rotation period.

Aside from the 5-minute oscillations, many longer-period oscillations were predicted to exist in stars more than 40 years ago but had not been observed on the Sun until now. “The long-period oscillations are caused by the rotation of the Sun; they are not acoustic in nature,” says Laurent Gizon, the study’s lead author and director of the MPS. “Detecting the Sun’s long-period oscillations necessitates long-term measurements of horizontal motions at the Sun’s surface. The continuous observations from the SDO’s Helioseismic and Magnetic Imager (HMI) are ideal for this purpose.”

“The long-period oscillations manifest themselves as very slow swirling motions at the surface of the Sun with speeds of about 5 kilometers per hour — about how fast a person walks,” says Zhi-Chao Liang from MPS. Kiran Jain from NSO, together with B. Lekshmi and Bastian Proxauf from MPS, confirmed the results with data from the Global Oscillation Network Group (GONG), a network of six solar observatories in the USA, Australia, India, Spain, and Chile.

The team compared observational data to computer models to determine the nature of these oscillations. “The models allow us to look inside the Sun’s interior and determine the full three-dimensional structure of the oscillations,” says Yuto Bekki, an MPS graduate student. The team began with a model of the Sun’s structure and differential rotation derived from helioseismology to obtain the model oscillations.

Furthermore, the model takes into account the strength of convective driving in the upper layers as well as the amplitude of turbulent motions. The model’s free oscillations are discovered by considering small-amplitude perturbations to the solar model. The corresponding surface velocities are a good match to the observed oscillations, allowing the team to identify the modes.

“All of these new oscillations we see on the Sun are strongly influenced by the Sun’s differential rotation,” MPS scientist Damien Fournier says. The maximum amplitudes of the modes are determined by the solar rotation’s dependence on latitude. “The oscillations are also sensitive to properties of the Sun’s interior: specifically, the strength of turbulent motions and the related viscosity of the solar medium, as well as the strength of convective driving,” says MPS’s Robert Cameron.

“The discovery of a new type of solar oscillation is very exciting because it allows us to infer properties such as the strength of the convective driving, which ultimately controls the solar dynamo,” Laurent Gizon says. The diagnostic potential of long-period modes will be fully realized in the coming year’s thanks to the development of a new exascale computer model as part of the WHOLE SUN project, which is funded by a European Research Council 2018 Synergy Grant.