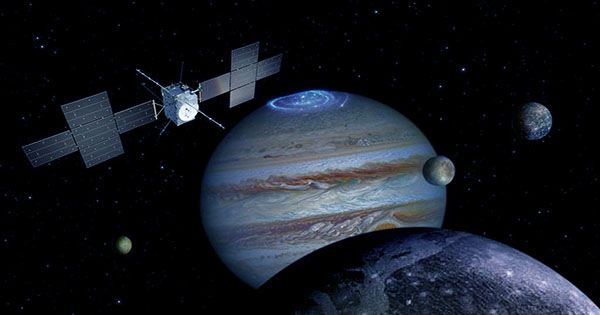 One of the Solar System’s most fascinating worlds has recently become even more so. The Hubble Space Telescope has discovered a small but continuous layer of water vapor on Jupiter’s moon Europa, although it only persists above the hemisphere opposite its orbital path for unknown reasons. Europa has become a top target for the search for life when the Voyager probes discovered that its surface ice hides a subsurface ocean of water. The discovery in 2013 that this water occasionally breaks through to form 100-kilometer-high geysers added to the excitement. Some of this water goes on to rebuild the ice on Europa’s surface, but some converts to gas, causing water vapor to detect.

However, the team that made the discovery only saw water vapor once out of 17 observations, implying that its presence was fleeting. Because the geysers only arise on rare occasions, it assumed that the gas would only last a short time after eruptions. The vapor is constantly present on Europa’s trailing hemisphere, according to a reanalysis of Hubble images published in Geophysical Research Letters.

Europa, like other moons, is “tidally locked,” meaning it takes the same amount of time to turn as it does to orbit Jupiter, so one face is constantly facing Jupiter. This also means that one side of the orbit is always leading and the other is always behind. Hubble observations on the trailing side from 1999 to 2015 found water on the trailing side alone.

The discovery is not entirely surprising. Sole author Dr Lorenz Roth of the KTH Royal Institute of Technology recently used the same combination of archival far-ultraviolet observations and spectra to find a water vapor atmosphere around Ganymede. Observations made under differing conditions, such as when part of Europa was in eclipse and the rest in sunlight. “Observing water vapor on Ganymede and on Europa’s following side increases our understanding of frozen moon atmospheres,” Roth said in a release. “However, because Europa’s surface temperatures are lower than Ganymede’s, the identification of stable water abundance on Europa is a little more startling than on Ganymede.”

Although both moons receive the same amount of sunlight, Ganymede is substantially darker and absorbs enough energy to be 35 degrees Celsius (60 degrees Fahrenheit) warmer. Even if it’s only a billionth of an Earth atmosphere worth over one hemisphere, Europa’s ability to maintain water gaseous at 162 oC (260 oF) is impressive. Previous observations indicated 30-50 times more molecular (O2) than atomic (O) oxygen in Europa’s atmosphere, according to the study.

The trailing hemisphere of Europa is darker and thus warmer than the leading hemisphere, but Roth doubts that the difference is significant enough to explain their findings. “The source of the water vapor cannot be established unambiguously,” they conclude. It remains to see what, if any, consequences this has for the search for life on Europe, but it does mean the Europa Clipper will have another thing to research when it launches in 2024.