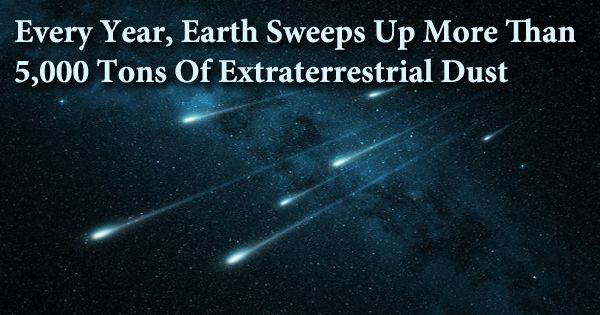 Every Year, Earth Sweeps Up More Than 5,000 Tons Of Extraterrestrial Dust

Our earth is swamped with dust from comets and asteroids every year. Shooting stars are formed as interplanetary dust particles move through our atmosphere. Any of them end up on the ground as micrometeorites. Our earth has often been bombarded by micrometeorites. These interplanetary dust particles from comets or asteroids are a few tenths to hundredths of a millimeter in size and have made it to the Earth’s surface since passing through the atmosphere. Scientists from the CNRS, the Université Paris-Saclay, and the National Museum of Natural History, with the help of the French Polar Institute, have estimated that 5,200 tons of micrometeorites hit the ground every year.

Six expeditions led by CNRS researcher Jean Duprat have taken place near the Franco-Italian Concordia station (Dome C), which is located 1,100 kilometers off the coast of Adélie Land, in the heart of Antarctica, to collect and analyze these micrometeorites over the last two decades. Dome C is an ideal collection spot due to the low accumulation rate of snow and the near absence of terrestrial dust.

Researchers collected over 2,000 micrometeorites from three snow pits dug in Antarctica over the course of three summers in the last two decades. According to Jean Duprat, a cosmochemist at Sorbonne University in Paris, much of Antarctica is the ideal repository for micrometeorites because there is no liquid water to dissolve or otherwise destroy them. Nevertheless, collecting the samples was no easy chore.

These expeditions have gathered sufficiently extraterrestrial particles (ranging in size from 30 to 200 micrometres) to calculate their annual flux, which is the mass accumulated on Earth per square metre per year. When these findings are extrapolated to the entire earth, the gross annual flux of micrometeorites is 5,200 tonnes. This is the primary source of extraterrestrial matter on our world, greatly outnumbering larger objects like meteorites, which have an annual flux of less than ten tons.

To enter layers of snow accumulated before 1995, when researchers established a field station at an inland site known as Dome C, Jean Duprat and colleagues had to dig down two meters or more. Then they collected hundreds of kilograms of snow with ultraclean instruments, melted it, and sieved the tiny treasures from the freezing water.

The team discovered 808 spherules that had partially melted when they blazed through Earth’s atmosphere, as well as 1,280 micrometeorites that were unaffected. The particles ranged in size from 30 to 350 micrometers in diameter and weighed just a few hundredths of a gram. The micrometeorites, on the other hand, were all discovered in three regions totaling just a few square meters, a tiny fraction of the Earth’s atmosphere. The team was able to predict how much dust falls across the entire planet by assuming that space dust particles are just as likely to land in Antarctica as anywhere else.

As the flux of micrometeorites is compared to theoretical estimates, it is confirmed that the majority of micrometeorites (80%) come from comets and the remainder from asteroids. Scientists will be able to learn more about the role of interplanetary dust particles in providing water and carbonaceous molecules to the young Earth as a result of the findings. Dust and ice make up comets. They come from far out, from the Kuiper belt to the Solar System’s far reaches. Comets become active when they reach the Sun, releasing cometary dust as their ices sublimate.

An asteroid is a rocky celestial body that ranges in size from a few hundred meters to several kilometers. The bulk of these bodies are found between Mars and Jupiter in the asteroid belt. According to the researchers, about 80% of the micrometeorites come from comets that spend much of their orbits closer to the sun than Jupiter. Most of the remainder were most likely the product of asteroid belt collisions. Per year, these microscopic particles deliver between 20 and 100 metric tons of carbon to the Earth.