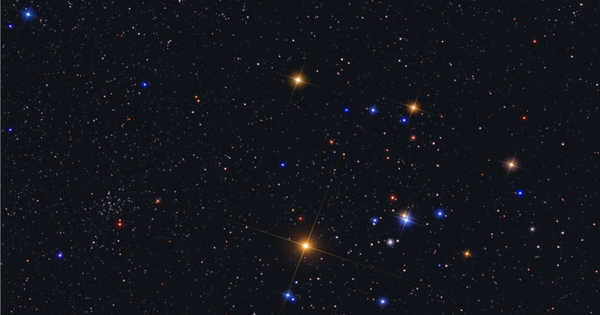 The tip of the “V” in Taurus is either a solitary, binary, or double star (the Washington Double Star Catalog refers to it as a “Dubious Double” or “Bogus Binary”). It is a member of the Hyades star cluster, the nearest open cluster to the Sun, and is located about 2.5 parsecs from its center. Gamma Tauri is approximately 154 light-years from the Sun, according to parallax measurements.

Gamma Tauri is a G8 or K0 spectral class giant star with an apparent magnitude of +3.65. This star has passed through the main sequence phase and is now a red clump giant, which means it gets its energy from the nuclear fusion of helium at its core. Gamma Tauri’s age is estimated to be between 430 million and 530 million years old. In comparison, the age of the Hyades cluster is approximately 625 million years, with a margin of error of 50 million years.

The angular diameter of this star was measured to a precision of 2% using the CHARA array. After adjusting for limb darkening, the stellar radius is 13.4 times that of the Sun. The star has 85 times the luminosity of the Sun and 2.7 times the mass of the Sun. It takes approximately 253 days to complete a rotation due to its large size and low projected rotational velocity of 4 km s-1.