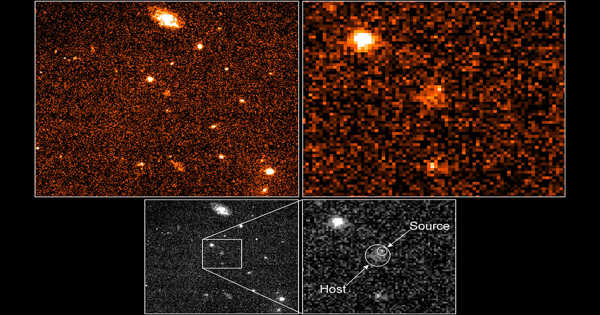 GRB 970228 was a type of gamma-ray burst (GRB). It was the first GRB to emit an afterglow. It was spotted on February 28, 1997. Scientists have predicted that GRBs will be followed by afterglows since 1993. GRBs, however, had previously only been observed in very bright bursts of high-energy gamma rays.

The light curve of the burst had several peaks. It lasted approximately 80 seconds. The light curve was out of the ordinary. This suggested that a supernova may have also occurred. GRB 970228 occurred in the same location as a galaxy 8.1 billion light-years away. This means that GRBs can be found outside of the Milky Way.

GRB 970228’s light curve anomalies suggested that a supernova may have occurred as well. The position of the burst coincided with a galaxy about 8.1 billion light-years away (a redshift of z = 0.695), providing early evidence that GRBs occur far beyond the Milky Way; this was proven conclusively two months later with GRB 970508.

Reichart demonstrated that GRB 970228’s light curve could only have been caused by a supernova. The spectrum of GRB 020813 and the afterglow of GRB 030329 eventually provided conclusive evidence linking gamma-ray bursts and supernovae. However, supernova-like features are only visible in the weeks following a burst, suggesting that very early luminosity variations could be explained by dust echoes.

A gamma-ray burst (GRB) is a bright flash of gamma rays, the most energetic type of electromagnetic radiation. The Vela satellites, a series of spacecraft designed to detect nuclear explosions, were the first to detect GRBs in 1967.

The Gamma-Ray Burst Monitor (GRBM) and one of the Wide Field Cameras (WFCs) on board BeppoSAX, an Italian–Dutch satellite originally designed to study X-rays, detected GRB 970228 on 28 February 1997 at 02:58 UTC.

The burst lasted approximately 80 seconds and had several peaks in its light curve. Gamma-ray bursts have very different time profiles, and it is unclear why some bursts have multiple peaks while others have only one. One possible explanation is that multiple peaks form when the gamma-ray burst’s source precesses. Within a few hours, the BeppoSAX team used X-ray detection to determine the burst’s position with an error box of 3 arcminutes (a small area around a specific position to account for position error). The Ulysses space probe also detected the burst.

Optical images of the error box were taken about one and nine days later with the William Herschel Telescope on La Palma; comparison of the images revealed a fading point source at a right ascension of 05h 01m 46.7s and a declination of +11° 46′ 53.0′′, providing the first arcsecond-accuracy localization of any Gamma-ray burst.

Later images after the point source faded revealed a faint galaxy at nearly the same position, the presumed host galaxy of the burst; a chance position coincidence was unlikely but possible, so the cosmological origin of GRBs was not conclusive until GRB 970508 observations about two months later.