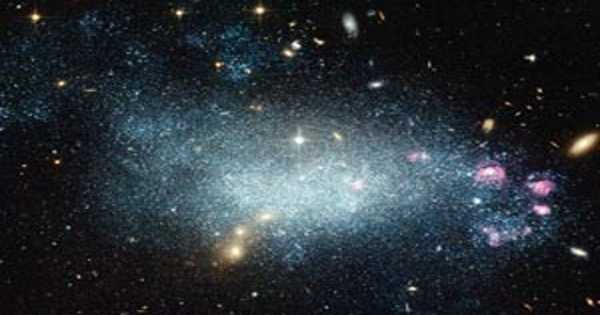 HD 100546 or KR Muscae is a celebrity. It is a star in the pre-main sequence. It is 361.4 light-years away from us. It is located in the constellation Musca in the night sky. It is not part of the Musca constellation outline, but it is within its boundaries. It only has one planet. HD 100546 is 6.5 AU away from the plant. A circumstellar disk surrounds the star from 0.2 to 4 AU and again from 13 AU out to a few hundred AU, with evidence for a protoplanet forming at a distance of around 47 AU.

The star is surrounded by dust and rock disks. One of these disks is 0.2 to 4 AU away from the star, while the other is 13 AU away and out to a few hundred AU. Scientists believe a protoplanet may exist between these two circumstellar disks, approximately 47 AU from the star.

Possible birth of a new planet

Researchers reported in 2013 that they had discovered what appears to be a planet in the process of formation, embedded in the star’s large disc of gas and dust. If confirmed, it would be the first observational study of the early stages of planet formation.

The UVES echelle spectrograph at the VLT in Chile was used to collect evidence for a planetary companion to HD 100546. This supports previous evidence of a planetary companion. HD 100546 b may be the largest exoplanet discovered, with a planet-size of around 6.9 RJ and a surrounding disk size of around 6.9 RJ; the planet’s size places it near the border between a large planet and a brown dwarf.

However, the position of HD 100546 b was inside compared to the gap between the inner and outer disks, and outside compared to the central cavity, indicating that the planet’s validity was demonstrated by the characteristics of the star disk. There was a misunderstanding during the discussion. The light source identified as HD 100546 b appeared to be a point light source in the analysis under specific conditions, but in many cases, it became a more diffuse structure as a result of more detailed observation of the position where HD 100546 b was detected.