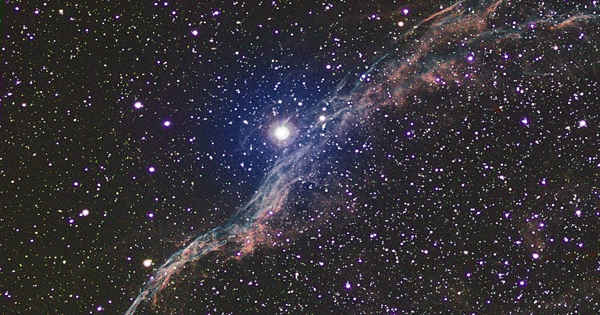 HD 160529, also known as V905 Scorpii, is a luminous blue variable (LBV) star in the Scorpius constellation. It is a Supergiant Star with a high luminosity. It is not part of the Scorpius constellation outline, but it is within its boundaries. With an apparent magnitude of around +6.8, it is difficult to see with the naked eye except under very favorable conditions, but it is easily visible with binoculars or amateur telescopes.

V905 Sco has a unique variable spectral type that includes emission lines and P Cygni profiles. At its brightest, it resembles an A9 star, and at its darkest, it resembles a B8 star. Based on an absolute magnitude of -8.9, the distance has been calculated to be 2.5 kiloparsecs (8,200 light-years). However, this distance is uncertain, and values ranging from 1.9 to 3.5 kiloparsecs have been proposed.

HD 160529’s variability was discovered 30-40 years ago through studies of its variable light and spectrum at different epochs, which revealed changes in its spectral type. Wolf et al. (1974) investigated the spectral variability of HD 160529 in-depth, discovering variations in the Balmer line profiles, radial velocity variations with an amplitude of about 40 km s-1, and line splitting of some metal lines. Absorption line intensity variations of the order of 20% were discovered, as well as significant photometric variations.

With a distance of 2.5 kiloparsecs, the radius varies from 150 R in quiescence to 330 R in outburst. The temperature varies as well, ranging from 8,000K during an outburst to 12,000K when quiescent. The apparent visual magnitude varies by 0.5 with these parameters, while the bolometric luminosity remains constant at 180,000 L.

Surface gravity estimates result in a mass of 13 M and a probable initial mass of 25 M. This indicates that V905 Sco was once a red supergiant star. The star cannot be seen with the naked eye and must be viewed through a telescope. According to the most recent Hipparcos data from 2007, the star is 6040.06 light-years away from Earth.