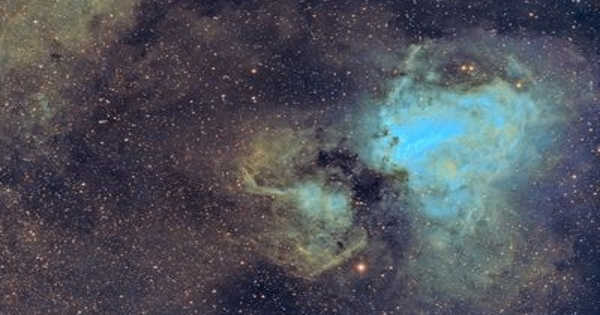 HD 168607’s long-term light- and color behavior suggests the presence of a very slowly developing S Dor phase – that is, a bright phase that coincides with redder colors.

Luminous blue variables exhibit luminosity variations over time scales ranging from days to decades. LBVs with the S Dor phase are fast rotators with velocities reaching the critical regime in their minimum phase, and theoretical models suggest that they may have strong polar winds. Their surrounding nebulae, such as the Homunculus nebula, are frequently axisymmetric, arguing that a single-star model cannot reproduce these bipolar nebulae.

When it was first identified as a Cygni variable, the apparent magnitude of this star or star system varied by 0.25 to 0.30 magnitudes over a period of 64 days. In contrast to its neighbor HD 168625, no nebula has been discovered around this star. It is classified as a luminous blue variable or S Doradus variable in the General Catalogue of Variable Stars, with the variable star designation V4029 Sagittarii and maximum and minimum visual magnitudes of 8.12 and 8.29, respectively. Despite the fact that it is suspected to be in or about to enter an S Doradus phase, no outbursts have been observed. A magnitude variation ranging from 8.05 to 8.41 has been reported from a broader set of observations.

HD 168607 is thought to have had a mass of 25 to 30 M when it first formed on the main sequence, but it now has a much lower mass. Based on its period and photospheric abundances, it appears to have passed through a red supergiant stage and has now expelled its outer atmosphere and increased its temperature.