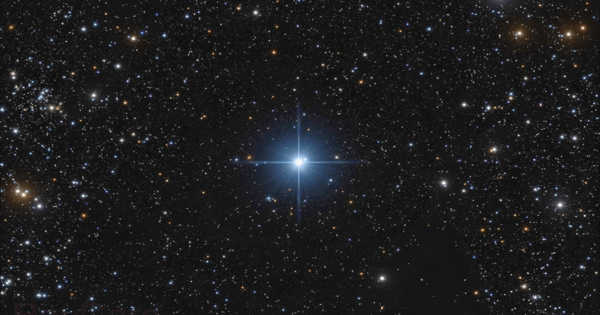 HR 4729 – a Hot Blue Star located in the Crux Constellation

HR 4729 is a bright blue star in the Crux constellation. It is a multiple star system located about 95 parsecs (310 ly) from the Sun in the constellation Crux and is part of the Southern Cross asterism. Many believe it is orbiting Alpha Crucis. The star is 5.5 times the size of the Sun. It is a close companion of Crucis and is sometimes referred to as Crucis C.

HR 4729 is the Bright Star Catalogue designation for the star. It is also known by its Henry Draper Catalogue number, HD 108250. Because of its proximity to Crucis, it is listed as Crucis C in many multiple star catalogues. It is also listed as star 25 in Crux in the Uranometria Argentina, displayed as 25 G. Crucis.

HR 4729 was discovered in 1829 by James Dunlop of Paramatta, New South Wales, as a companion to Crucis. HR 4729 was reported to have a variable radial velocity, indicating a likely binary system, as early as 1916, but the orbital elements were not calculated until 1979.

HR 4729 is 90 arcseconds away from the Crucis triple star system and shares its motion through space, implying that it is gravitationally bound to it, and is thus widely assumed to be physically associated. HR 4729 is a close spectroscopic binary system with a period of 1 day 5 hours. It is commonly referred to as Crucis C in the context of being a companion to Crucis. It also has a faint visual companion 2.1″ away, as well as seven faint stars in the Crucis group out to a distance of about two arc minutes. One of the companions, which is very close to HR 4729, has been resolved using adaptive optics at infrared wavelengths. It has been named α Crucis P, or α Crucis CP because it is only 2″ from HR 4729.

HR 4729 is a hot class B main-sequence star that is almost ten times the mass of the sun. It is only about twelve million years old, but it has already begun to diverge from the main sequence. Several studies have assigned the star a subgiant luminosity class.

Because the spectroscopic companion is not visible in the spectrum, little is known about its properties. The orbital analysis reveals that it has a mass greater than the sun. Crucis D or Crucis CP, the physically associated companion, is a 15th magnitude star. Its spectral type is M0 V based on its relative obscurity. HR 4729 is surrounded by two other, even fainter stars.