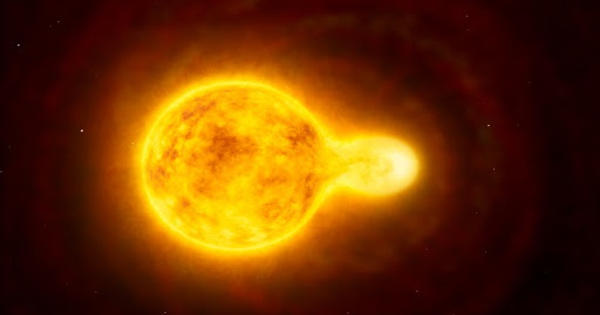 The HR 5171 system contains at least three stars. The primary A is an eclipsing binary with two yellow stars in contact and orbiting in 1,304 days. The hypergiant is part of a double-star system, with the second component so close that it is in contact with the main star. Component B, located 9.4 arc seconds away from the primary, is a blue supergiant with spectral type B0. Despite its great distance of nearly 12,000 light-years from Earth, HR 5171 can just about be seen with the naked eye by the keen-sighted. HR 5171A and its companion, HR 5171B, are so close that they touch and the whole system resembles a gigantic peanut. It is a highly luminous massive star in itself but visually three magnitudes fainter than the yellow hypergiant.

HR 5171 was first studied and classified a few years ago by French astronomer Olivier Chesneau and co-authors when the larger component was found to be something known as a yellow hypergiant. HR 5171 shows erratic changes in brightness and color. HR 5171B is apparently stable, with the changes being due to physical changes in the hypergiant star, variations in the envelope, and eclipses between the two close companions. There is also said to be a third star orbiting the contact binary further out in the system.

Measuring over 1,400 times the diameter of the Sun, HR 5171A was not only the largest star of its type ever discovered, but also one of the ten largest stars ever found. HR 5171B is only slightly hotter than HR 5171 A’s surface temperature of 5,000 degrees Celsius. It is 50% larger than the huge Betelgeuse and about 1,000,000 times brighter than the Sun.