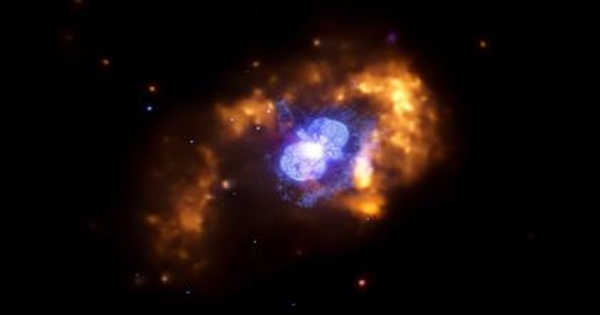 HR Carinae is a bright blue variable star in the constellation Carina. Because this star has multiple shells expanding atmosphere, it is surrounded by a massive nebula of ejected nuclear-processed material. This star is one of the most bright in the Milky Way. It has very broad emission wings on the Balmer lines, similar to the broad lines seen in the spectra of O and Wolf–Rayet stars. HR Car is one of the galaxy’s brightest stars, with a bolometric magnitude of -9.4 and a distance of 5 kpc.

HR Carinae was discovered in the early twentieth century due to its H emission. It was classified as Secchi class I, which corresponds to modern A and F-type stars. It was discovered to be variable in 1940 after being cataloged as a Be star in 1933. A more detailed spectroscopic examination revealed that it is of the type B2eq, with emission lines of hydrogen, helium, and ionized iron, as well as P Cygni profiles on some lines.

By 1970, HR Carinae and the related variable AG Carinae had been identified as being related to the P Cygni variables, which are unstable hot supergiants. To avoid confusion with the P Cygni spectral features shared by other types of stars, the group was formally designated as S Doradus variables. HR Carinae became one of the most well-studied examples of the class, displaying the brightness and spectral variations that came to characterize the stars known as luminous blue variables.

HR Carinae exhibits spectral variations that appear to be correlated with slight variations in the same way that other luminous blue variables do. It has had several outbursts, during which the visual brightness increased and the temperature decreased, but the bolometric luminosity remained roughly constant. The visual brightness increased erratically but consistently in the late twentieth century, reaching a record peak of mag 6.8 before plummeting to a record low of mag 8.8 by 2010.

HR Carinae has a temperature of around 21,000 K when quiescent, and its spectrum is that of an early B hypergiant, but it cools to below 8,000 K during outbursts.

In simulations of the fate of stars 20 to 25 times the mass of the Sun, it has been identified as a possible type IIb supernova candidate (with LBV status as the predicted final stage beforehand).