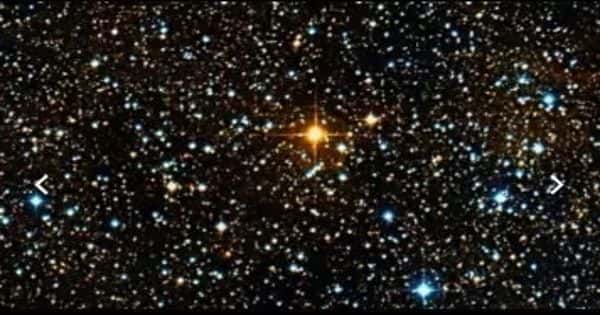 HV 888 is a very luminous Supergiant Star-type star. It is also known as WOH S140, which is a red supergiant (RSG) star located in the Large Magellanic Cloud. It is not part of the Dorado constellation outline but is within the borders of the constellation. It is one of the top 10 largest stars known it is so big if you place it in the Solar System it will engulf the orbit of Jupiter and filling the orbit of Saturn it is 1961-2240 radii he was measured at 2557.

The location of the supergiant star in the night sky is determined by the Right Ascension (R.A.) and Declination (Dec.), these are equivalent to the Longitude and Latitude on the Earth. It is among the largest known stars, with a radius ranging from over 1,400 to nearly 2,000 times that of the Sun (R☉), and is also one of the most luminous of its type with a range of nearly 300,000 to over 500,000 times that of the Sun (L☉). If placed at the center of the solar system, its photosphere would engulf the orbit of Jupiter.

When we talk about the biggest stars in the Universe, we can obviously only compare the stars we know about. HV 888 is an enigmatic red supergiant, surrounded by a vast toroidal nebula of gas and dust. Since we know there are many stars too far away to study, and we don’t really know how big a star can get, it’s likely that there are stars out there somewhere that are bigger than the ones we’re aware of. With a radius 1,500–2,000 times the solar radius and luminosity hundreds of thousands of times higher than the Sun, HV 888 is, as far as we know, the largest and brightest AGB star of the Large Magellanic Cloud. Therefore, all we can currently report are the biggest known stars, not the biggest stars that exist.

The effective temperature is estimated to be around 3,500 K. Based on the spectral type, we can deduce that the surface temperature of the star is in the order of between below 3,500K based on the notes from Harvard University. If placed at the center of the Solar System, its photosphere would engulf the orbit of Jupiter and possibly even Saturn.