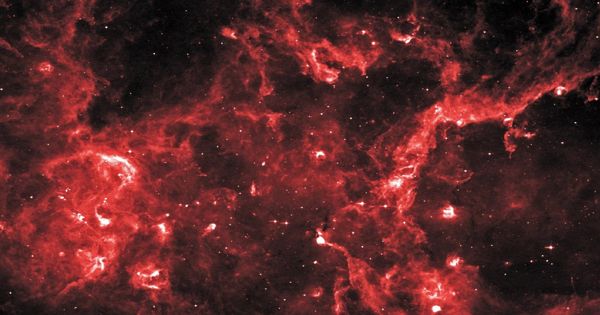 IRAS 05280-6910 is one of the top 10 largest stars known and it is 1735 solar radii. It is a red supergiant. It is a red supergiant star or OH/IR supergiant star located in the Large Magellanic Cloud. The nearby dwarf irregular galaxies the Large and Small Magellanic Clouds have metallicities of about half and a fifth solar, respectively, which offers the unique opportunity to study astrophysical processes as a function of metallicity. High-mass stars lose a large amount of mass during the RSG phase, determining the RSG mass at the time of a SN explosion.

IRAS 05280−6910 was found towards the cluster NGC 1984. Its radius is calculated to be more than a thousand times that of the Sun, making it one of the largest stars discovered so far. If placed at the center of the Solar System, its photosphere would engulf the orbit of Jupiter. It has an estimated mass-loss rate of 5.4×10−4 M☉ per year, one of the highest known for any red supergiant star.

The hydrodynamical simulation of RSG mass loss is not yet fully modeled theoretically, but the basic mechanisms are believed to be the same as for asymptotic giant branch (AGB) stars, which are their lower mass evolutionary counterparts. AGB stars are more populous than RSGs and thus better investigated. It is widely accepted that stellar winds from RSGs and AGB stars are dust-driven: stellar pulsations elevate some gas from the stellar surface, and from the levitated atmosphere dust grains are condensed.

At the end of their lives, stars lose a large fraction of their mass from their surfaces. High-mass (>8 M⊙) stars evolve into the red-supergiant (RSG) phase and lose a large amount of mass through stellar winds. IRAS 05280−6910’s mid-IR spectrum shows 10 μm silicate bands in absorption with a peak of the SED at about 25 μm. OH, and H2O masers have been detected. Due to this dust-driven mechanism, the mass-loss rates from RSGs and AGB stars should depend on two major parameters: the luminosity of the central star, and the metallicity of the galaxy.

With the Herschel SPIRE and PACS spectrometers, scientists have detected CO emission from IRAS 05280−6910 and WOH G64, with multiple CO detections from IRAS 05280−6910. Scientists modeled the IRAS 05280−6910 SED with a dust radiative transfer code, constraining the mass-loss rate and the structure of the circumstellar envelope. These dust model parameters were used to further model the CO rotational lines, resulting in good fits to the lines.