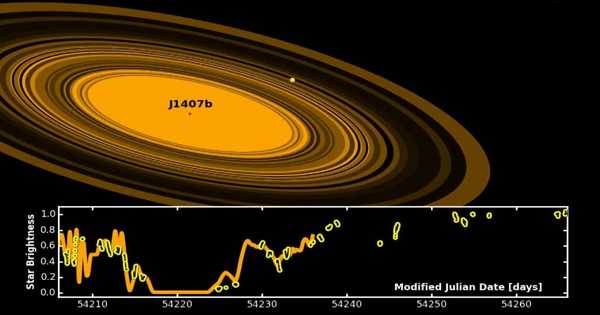 J1407 – a Star in the Constellation Centaurus

J1407 is a star similar to the Sun in the constellation Centaurus, located approximately 434 light-years away from Earth. It’s a main-sequence star, like our Sun. It is 434 light-years away from Earth, in the constellation Centaurus. It is a young star, estimated to be 16 million years old, with a mass roughly 90% that of the Sun. It is not visible to the naked eye and must be viewed through a telescope. It is a very young star, only 16 million years old. It is a variable star because it is orbited by a planet.

The star has an apparent magnitude of 12.3 and can only be seen with a telescope. The star’s name is derived from the SuperWASP (Wide Angle Search for Planets) program and the coordinates of the star. Because of the planet orbiting it, the star is variable and has been given the variable star designation V1400 Centauri.

J1407 is a star in the constellation Centaurus at a distance of about 434 light-years from Earth. A relatively young star, its age is estimated to be 16 million years, and its mass is about 90% that of the Sun.

J1407 was eclipsed and orbited by at least one major body in 2007, 1SWASP J1407b (J1407b), which is thought to be either a large gas giant planet or a brown dwarf with a massive ring system. Subsequent observations failed to detect J1407b, implying that it is in a highly eccentric orbit around the star.

It was discovered in 2021 that the parent star is highly variable, with a 5.4-year magnetic activity cycle.

The J1407 system and its unusual eclipses were discovered in 2012 by a team led by University of Rochester astronomer Eric Mamajek. The existence and parameters of the ring system surrounding the substellar companion J1407b were deduced from observations of a 56-day long and complex eclipse of the parent star in April and May 2007. Because of its massive system of circumplanetary rings with a radius of approximately 90 million kilometers, the low-mass companion J1407b has been dubbed “Super Saturn” or “Saturn on steroids” (0.6 AU).

J1407b’s orbital period is estimated to be around a decade (3.5 to 13.8 years), and its most likely mass is between 13 and 26 Jupiter masses, but this is subject to considerable uncertainty. With greater than 99 percent certainty, the ringed body cannot be a star with a mass greater than 80 Jupiter masses. The estimated mass of the ring system is similar to that of the Earth. A significant gap in the rings about 61 million kilometers (0.4 AU) from its center is thought to be indirect evidence of the existence of an exomoon with a mass of up to 0.8 Earth masses.